A Luwian Statue from Tayinat, Turkey 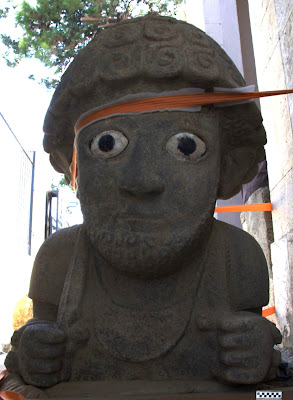 Love this strange statue from Tayinat in southeastern Turkey:


A beautiful and colossal human sculpture is one of the latest cultural treasures unearthed by an international team at the Tayinat Archaeological Project (TAP) excavation site in southeastern Turkey. A large semi-circular column base, ornately decorated on one side, was also discovered. Both pieces are from a monumental gate complex that provided access to the upper citadel of Kunulua, capital of the Neo-Hittite Kingdom of Patina (ca. 1000-738 BC). . . . 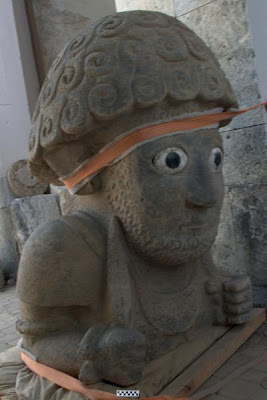 The head and torso of the human figure, intact to just above its waist, stands approximately 1.5 metres in height, suggesting a total body length of 3.5 to four metres. The figure's face is bearded, with beautifully preserved inlaid eyes made of white and black stone, and its hair has been coiffed in an elaborate series of curls aligned in linear rows. Both arms are extended forward from the elbow, each with two arm bracelets decorated with lion heads. The figure's right hand holds a spear, and in its left is a shaft of wheat. A crescent-shaped pectoral adorns its chest. A lengthy Hieroglyphic Luwian inscription, carved in raised relief across its back, records the campaigns and accomplishments of Suppiluliuma, likely the same Patinean king who faced a Neo-Assyrian onslaught of Shalmaneser III as part of a Syrian-Hittite coalition in 858 BC. 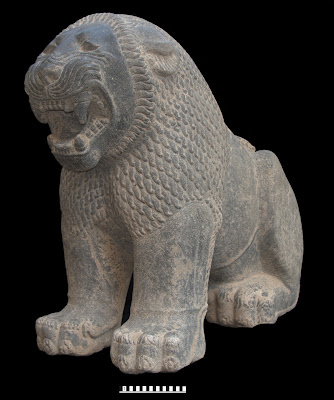