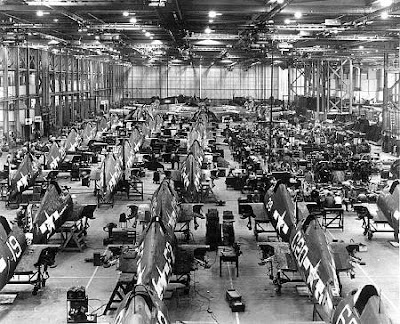 One of the things that struck me while reading Max Hastings' Inferno was how many people accurately predicted the course of the war. Consider this letter from John Steinbeck, written just after Pearl Harbor:


The attack, whatever it may have gained from a tactical point of view, was a failure in that it solidified the country. But we'll lose lots of ships for a while.

Spot on. Of course, many other people predicted that the United States would crush Japan, including Japanese admiral Isoroku Yamamoto and the whole American leadership.

What about the European war? Hastings describes a conference held in Berlin in late November, 1941. Chaired by Fritz Todt, the chief of armaments production, it included the top executives of German heavy industry and leading Nazis. It concluded that winning the war against Russia was "no longer possible." Having failed to win a quick knock-out, Germany could not prevail in a long conflict because its industrial production was not up to the job. Todt advised Hitler that he should seek a negotiated end to the conflict.

Did the industrial czars know, or were they just guessing? Governments produce lots of reports, and some on them are bound to be right. As Hastings says, the military leaders of the US and Britain went on thinking all through 1942 that Germany would defeat the Soviets. Other westerners disagreed, including George Orwell, who thought Hitler had signed his death warrant by attacking Russia before finishing Britain.

I find myself wondering if, perhaps, World War II really was more predictable than other events. Because it was a total war, it came down in the end to who had the most factories and the most men. The Germans outfought and out-thought the Soviets at almost every level, but it the end they were crushed by the sheer number of Russian soldiers and tanks. In 1942, Germany produced 4,800 armored vehicles, while the Soviets produced 24,000 and the Americans, still warming up, 25,000. The entry of America on the allied side made the imbalance severe; in 1944, the United States produced twice as many military aircraft as Germany and Japan combined.

This kind of analysis depends, though, on accurate knowledge. One reason the British and Americans over-rated Hitler's chances in Russia was that they consistently over-rated German industrial capabilities. Hitler convinced much of the world that Germany was a hyper-modern industrial powerhouse, whereas really the efficiency of its heavy industries lagged behind American and Soviet standards, and much of its agriculture was still in the hands of peasants. His own armaments chiefs had a clearer view of German industry.

I tend to think that given the alignment of the two sides, and the determination of Stalin, Churchill, and Roosevelt to fight through to the end, the result of the war was never really in doubt, and Hitler could only have prevailed by finding some way to fight his enemies one at a time.
Posted by John at 7:16 PM

The outcome of the Japanese war was certainly predictable, and predicted by many. The tough question comes down to whether the Germans could have beaten the Soviets, or for how long they had a chance to do so. Richard Overy suggests that the Germans could still have beaten the Soviets in 1943, which may be exaggerating things, but it seems to me the Soviet regime and army were still potentially fragile in 1942, especially if Stalin had continued ordering counterattacks after September, instead of waiting until his generals were actually ready. But I wouldn't stick on this point. The main point you make that I would quibble with is the idea that the "Germans outfought and out-thought the Soviets at almost every level, but it the end they were crushed by the sheer number of Russian soldiers and tanks." This was certainly the line taken by Germany's ex-generals after the war, but I've seen good arguments that by mid-1943, Soviet units could face down Germans in straightforward duel, and by 1944 they could outfight good German units in frontal combat without particularly relying on numbers etc., though there would be a lot of death along the way. To put it more simply, I just don't buy a blanket denigration of Soviet combat qualities certainly by the last two, possibly even the last three years of the war. If Hastings argues that, then he should be in for strong challenges on it from fellow WWII historians.

Hastings indeed thinks the Russians remains tactically inferior to the Germans through 1943 at least, and he even thinks they took many unnecessary casualties in the Battle of Berlin because they launched a "clumsy frontal assault" on the strongest part of the German lines.

Well, yes, the assault up Seelowe Heights was really, really stupid and wasteful. I have this memory that that resulted in large part from the fact that Stalin started intervening in battlefield decisions again; he wanted Berlin taken ASAP, he didn't want Zhukov to get all the credit (hence he made the attack on the city a kind of race between Zhukov and Konev), and I dimly remember he wanted the Nazi regime to fall before May 1, so that it would time nicely with Mayday. In any case, individual badly-conceived and executed operations--especially with political interference motivating them--aren't necessarily important in this argument. Kursk was a similar disaster for the Germans, but that doesn't mean the German Army didn't know how to fight. Of course, part of the reason Kursk was a bad idea for the Germans was they didn't have the resources and manpower to recover from a mistake, whereas the Russians did, which goes to show the crucial importance of resources, which I wouldn't deny.

I suppose one should imagine the argument about Soviet combat capabilities on a continuum. At one end is Overy's arguably over-positive assessment, and the other is a sort of US Cold War image of the Soviet drive from the Volga to Berlin as a vodka-fueled slaughterfest, in which the Russians couldn't think of any better tactic than simply swamping the brilliant Germans would hordes of badly-equipped Slavic orcs. I tend to be more critical of arguments that lean toward the latter end of the continuum, but I'm sure Hastings isn't just trying to resurrect old stereotypes, and obviously sensible people can disagree over where in the middle we should put the assessment.