Svetloyar Lake and the Myth of the Sunken City 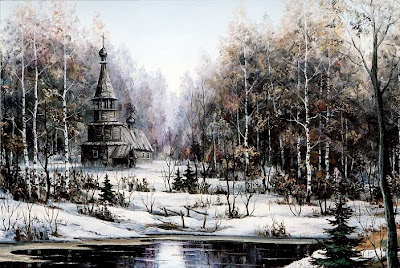 Across the globe, humans are fascinated by stories of cities disappeared beneath the waves. Atlantis is of course the most famous, followed by the Celtic Ys, but there are many, many other such stories. One is in Russia, where Svetloyar Lake near Nizhny Novgorod has long been rumored to hold the lost town of Kitezh:


Residents of Nizhny Novgorod are sure that the legends of their Kitezh date from the earliest days of Rus’, but the first mention of this sacred city dates back to the modern times. The death of Prince Georgy Vsevolodovich under the walls of Kitezh walls was outlined in the Kitezh Chronicle, which was created by Old Believers in the 1780s. According to the Chronicle, the city was founded by Prince Georgy. The book also mentions a Maliy Kitezh (Small Kitezh) on the banks of the Volga River, but notes that both cities were destroyed during the Mongol invasions. The Chronicle does not mention the disappearance of the city into the lake – just that it disappeared after it was destroyed and all its inhabitants killed.

However, the Old Believers – Russian Orthodox dissenters who never reconciled themselves to the Russian church reform of the 17th century – found much to like in the idea of a hidden city where the righteous live and work in prayer, and where only the chosen ones can enter, and gradually the legend of Kitezh emerged.

There has long been an annual procession from a chapel on Krestovozdvizhensky Hill to a spot on the lake shore where Kitezh was thought to have been. However, earlier archaeological expeditions had failed to find any sign of a sunken city. Then in the summer of 2011 archaeologists returned, this time focusing on their efforts on the site of the procession. They found evidence of a medieval settlement. In the lake nearby they found the sunken wooden walls of a large house. Once again we see that folklore is capable of preserving information, like the location of a town, accurately for centuries.

What I find most interesting about these stories is their appeal. Why are we more fascinated by cities sunken under water than those buried under ground? Is is some primal psychological thing, as a Freudian might argue? Is it the violation of the boundary, so fundamental in our thinking, between land and sea? Is it just weird?
Posted by John at 9:27 AM