More Data on American Indian Genetics, or, How to Miss the Point of Your Own Data 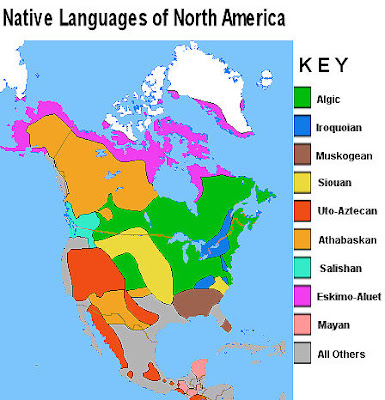 The New York Times has a story today, by the reliably wrong-headed Nicholas Wade, on the genetic history of American Indians. The headline is, Earliest Americans Arrived in Waves, DNA Study Finds. This sounds like support for a model of multiple ancient migrations. Actually the study found that almost all Native Americans are descended from one group of immigrants from Asia -- the same migration that others have dated to around 15,000 years ago. The other "waves" are the small group of Athapascans or Na-Dene, whose late arrival is attested by their strange language and their own oral history, and Eskimos. As you can see from the map above, the Na-Dene (except for the Navajo) and the Eskimos are the closest groups to Asia, which is where you would expect late arrivals to be. I suppose it is nice that the genetic data supports the model derived from linguistics, archaeology, and oral history, but really there just isn't any news here.

This study actually adds more support to the reigning orthodoxy, the theory that most Indians descend from a single group of migrants who arrived around the end of the Ice Age. I started to write a post fulminating at Nicholas Wade for passing on this incoherence, but I see from the abstract that the problem originates with the geneticists who wrote the original Science piece. Neither they nor Wade seem to know that there is a raging debate about how many ancient migrations there were, and whether any came from Europe, and whether they left Asia 15,000 or 25,000 years ago, and so on. To anyone who follows that debate, the Times headline implies the opposite of what the story ends up saying. Aren't science journalists supposed to know about this sort of thing? I have gotten used to the abysmal ignorance of most geneticists when it comes to archaeology, but shouldn't the editors of Science know?
Posted by John at 8:43 PM