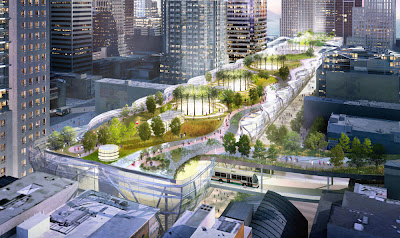 Despite its ongoing budget crisis, California continues to make big moves in public transportation. If the high speed rail line ever reaches San  Francisco --for reasons that escape me, the first segment to be built will be in the central valley, where nobody lives, rather than starting from LA -- it will pull into a gleaming new transportation hub to be called the Transbay Center. 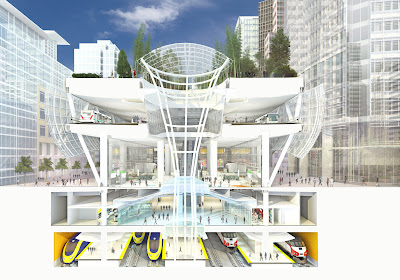 Transbay is planned as a complete intermodal hub, with BART, commuter rail, buses, and intercity rail on four levels. 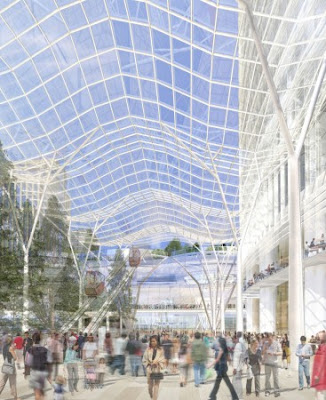 The building, designed by Pelli Clarke Pelli Architects, will be LEED certified, highly energy efficient, with a gray water recycling program, and a 5.4-acre park on top. Besides serving as a transportation hub, it is intended to spur more construction south of the old downtown, where the preservation of historic buildings and neighborhoods has led to a near complete ban on new building. The plan calls for now vacant land around the station to be built up with 2,600 apartments, 3 million square feet of office space and 100,000 square feet of retail.

It isn't cheap -- the total cost for the new station and extensions of the BART and Caltrain lines is about $4 billion -- but this this the kind of bold step that will keep our cities great.
Posted by John at 7:31 PM