Did Columbus Cause the Little Ice Age?

The theory, originated by William Ruddiman, has been getting a lot of press because Charles Mann featured it in his new book, 1493. The theory goes like this:

As human communities grow, Ruddiman pointed out, they open more land for farms and cut down more trees for fuel and shelter. In Europe and Asia, forests were cut down with the ax. In the Americas before [Columbus], the primary tool was fire. For weeks on end, smoke from Indian bonfires shrouded Florida, California, and the Great Plains. . . . [Columbus comes]

Enter now the Columbian Exchange. Eurasian bacteria, viruses, and parasites sweep through the Americas, killing huge numbers of people -- and unraveling the millenia-old network of human intervention. Flames subside to embers across the Western Hemisphere as Indian torches are stilled. In the forests, fire-hating trees like oak and hickory muscle aside fire-loving species like loblolly, longleaf, and slash pine, which are so dependent on regular burning that their cones will only open and release seed when exposed to flame. Animals that Indians had hunted, keeping their numbers down, suddenly flourish in great numbers. And so on.

So population collapse in the New World, which may have lost 90 percent of its people, led to forest growth and therefore global cooling.

Except that the Little Ice Age started in about 1315. Cooling temperatures drove the Vikings out of Greenland by the mid 1400s. How is Columbus supposed to have been responsible for a cooling that started 150 years before he was born?

Here is a simple, schematic graph: 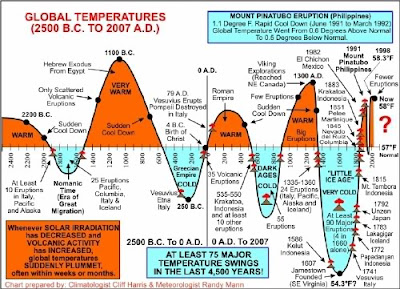 And here is a compilation of several data curves: 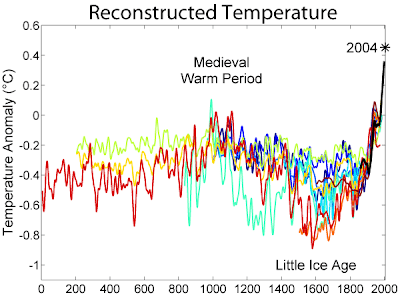 It is possible, I suppose, that reforestation in the Americas helped extend the Little Ice Age or make it somewhat cooler, but it cannot have been the "cause."
Posted by John at 8:46 PM

The theory that Columbus caused the Little Ice Age is obviously stupid. But get a load of this Cliff Harris and Randy Mann duo. I love the notion of a "Grecian Empire." And from them, we get a pretty clear explanation of how history works: "Our last major ‘Warm-Dry’ phase occurred during the 1930's. Of course, many do remember the infamous ‘Dust Bowl’ and worldwide drought and depression. This pattern completes a 102-year cycle which dates from 1936. And, if history is any indication of what’s to come, our chart says that we could see a huge stock market crash, global depression, new outbreaks of unknown disease, and perhaps, a third World War if we stay warm and precipitation levels fall on a global scale sometime between 2020 to 2038."

Wow, history really does repeat itself! In carbon copies!