Virtue and Democracy in Greece 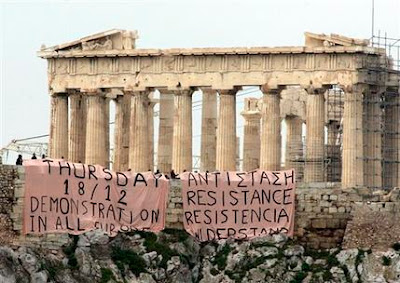 I have read a couple of left-wing pieces lately praising the protesters in Greece for their commitment to real democracy. I wish them well, but I really wonder what it is they expect their government to do. I am sure it is galling to see a bunch of sleek German economists in Italian suits descend on their country and order the raising of taxes and the slashing of government spending, but I have yet to read about any serious alternative.

The Greek state is bankrupt. After decades of corruption and the creation of what even one far left reporter called an "ever increasing army of civil service bureaucrats and professional syndicalists seeking and gaining the benefits of a clientelist state . . . implicated together in a lucrative but utterly careless para-economy", there is no money. Greece has long been funded by foreigners buying Greek government debt, and they no longer want to buy any more. Do the protesters think the Germans should order their bankers to buy more Greek bonds? Why would they want to do that?

I think that what Greece should do is default, withdraw from the Euro, and, yes, try to restore a real Greek democracy. (What do you know, I agree with the Socialist Worker.) But that would be economically catastrophic, leading to a decade of depression. All those Greek railroad employees who are losing their jobs now would have to lose them anyway. In return for a surrender of their independence the Greeks are getting billions more in foreign money. That money will keep the "clientelist state" going for a while, although at a lower level. The idea is to ease the shock, while also preserving the Euro and with it the illusion of European unity. I don't really like this plan but, as I said, I have yet to read of any other that wouldn't entail at least as much pain for ordinary Greeks.

It all makes me think back to the early days of democratic agitation in Europe and America, when revolution was all bound up with personal virtue. The pronouncements of revolutionaries in France and America were full of talk about the need for virtue, because, they said, people without it would inevitably become slaves. In Greece, the people have been displaying a remarkable lack of virtue for a long time -- bribing each other, refusing to pay taxes, demanding raises in their government sinecures, and so on, driving the state to bankruptcy. As a result they have effectively lost their independence. If they want "real democracy," they will have to start by being willing to pay enough in taxes to cover all the benefits they want from the government. Only then will they be free.

I have the same feelings about deficit spending in the US. If we want to be citizens of a free nation, we have to be willing to pay for the privilege. I am willing to debate what level of government spending and taxation is appropriate, but whatever the level is they ought to be the same.
Posted by John at 7:43 AM