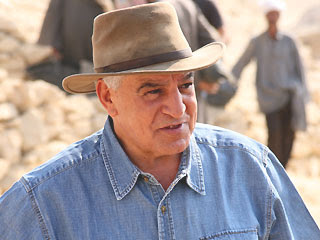 Egypt's antiquities minister, whose trademark Indiana Jones hat made him one the country's best known figures around the world, was fired Sunday after months of pressure from critics who attacked his credibility and accused him of having been too close to the regime of ousted President Hosni Mubarak.

Zahi Hawass, long chided as publicity loving and short on scientific knowledge, lost his job along with about a dozen other ministers in a Cabinet reshuffle meant to ease pressure from protesters seeking to purge remnants of Mubarak's regime.

"He was the Mubarak of antiquities," said Nora Shalaby, an activist and archaeologist. "He acted as if he owned Egypt's antiquities, and not that they belonged to the people of Egypt." . . .

"He was a personality created by the media," said Abdel-Halim Abdel-Nour, the president of the Association of Egyptian Archeologists.

Of course, Hawass has already lost his job once in Egypt's political turmoil and gotten it back, so it remains to be seen if this is permanent. He is quite an operator. But how sad it must be for him to see his own trademark hat equated with the totally different hat of Indiana Jones -- who, Hawass liked to say, was obviously a copy of him anyway. I beg to differ with Abdel-Halim Abdel-Nour, though; Hawass was his own creation, one of the great self-promoters of our self-promotional age, and if he was often on television that was because he used television (and Egypt's antiquities) as instruments of his self-glorification.

Incidentally, last week Kate Taylor laid out in the Times how some of Hawass' financial and political deal-making worked. He gets $200,000 a year from National Geographic as an "Explorer in Residence", even though he is not an explorer and lives at his own house, and everybody assumes this is so National Geographic writers and photographers will continue to get good access to Egyptian archaeological sites. The gift shop at the Egyptian museum was closed after it was reported that Hawass awarded the contract for operating it to an associate in a sweet deal. And:

He has relationships — albeit ones he says he does not profit from — with two American companies that do business in Egypt. One, Arts and Exhibitions International, secured Mr. Hawass’s permission several years ago to take some of the country’s most precious treasures, the artifacts of King Tut, on a world tour; its top executives recently started a separate venture to market a Zahi Hawass line of clothing.

A second company, Exhibit Merchandising, has been selling replicas of Mr. Hawass’s hat for several years. Last year that company was hired to operate a new store in the Egyptian Museum in Cairo.

Mr. Hawass says his share of the profits from those products goes directly to Egyptian charities.

Which seems to have been largely true, with the twist that the charities Hawass favored were controlled by the wife of ex-President Mubarak. Hawass could say in his defense that this was how things were done in Egypt and the if he had not played by the rules he could not have done all the good work he did promoting Egyptian archaeology. But to Egyptians the point of their revolution was to end that whole way of doing business. So Hawass, an archetype of that system, has to go.
Posted by John at 6:54 AM