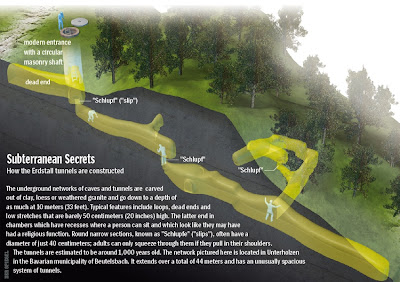 The weirdest archaeological story of the year:

Beate Greithanner, a dairy farmer, is barefoot as she walks up the lush meadows of the Doblberg, a mountain in Bavaria set against a backdrop of snow-capped Alpine peaks. She stops and points to a hole in the ground. "This is where the cow was grazing," she says. "Suddenly she fell in, up to her hips." A crater had opened up beneath the unfortunate cow. . . .

The Greithanners, from the town of Glonn near Munich, are the owners of a strange subterranean landmark. A labyrinth of vaults known as an "Erdstall" runs underneath their property. It is at least 25 meters (82 feet) long and likely stems from the Middle Ages. Some believe that it was built as a dwelling for helpful goblins.

The geologists and land surveyors who appeared on Greithanner's property at the end of June were determined to get to the bottom of the mystery. Three members of a group called the "Working Group for Erdstall Research," wearing red protective suits and helmets, dragged the heavy concrete plate away from the entrance and disappeared into the depths.

Their leader, Dieter Ahlborn, began by crawling through a passageway only about 70 centimeters (2 foot 3 inches) high. His colleague Andreas Mittermüller had to return to the surface when the lack of oxygen in the tunnel gave him a headache. Ahlborn continued crawling into the space until his lamp revealed a decayed piece of wood. 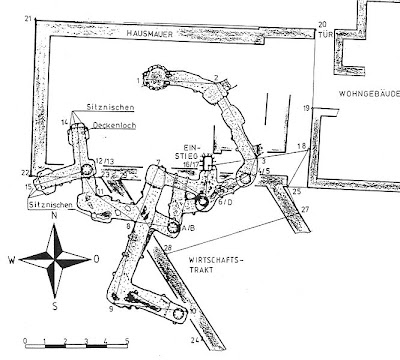 He picked it up as if it were a precious stone, knowing that it could offer an important clue about the age of the manmade cave. . . .

At least 700 of these chambers have been found in Bavaria alone, along with about 500 in Austria. In the local vernacular, they have fanciful names such as "Schrazelloch" ("goblin hole") or "Alraunenhöhle" ("mandrake cave"). They were supposedly built by elves, and legend has it that gnomes lived inside. According to some sagas, they were parts of long escape tunnels from castles.

In reality, the tunnels are often only 20 to 50 meters long. The larger passageways are big enough so that people can walk through them in a hunched position, but some tunnels are so small that explorers have to get down on all fours. The tiniest passageways, known as "Schlupfe" ("slips"), are barely 40 centimeters (16 inches) in diameter.

A few radiocarbon dating analyses have also been performed, and they indicate that the galleries date back to the 10th to the 13th century. Bits of charcoal recovered from the Erdstall tunnels in Höcherlmühle date back to the period between 950 and 1050 A.D.

The ground beneath the southern German state of Bavaria is literally perforated with these underground mazes -- and no one knows why. . . .

The two main theories are hiding places used to escape from bandits and "gateways to the underworld" used for some sort of spiritual experience. The problem with the hideaway theory is that the tunnels are very narrow, have no rear entrances, and are almost completely empty (if people hid in them with their valuables they would surely have dropped something). The problem with the gateways to the underworld theory is that there is no documentary evidence, and we know rather a lot about medieval religion. More from German Wikipedia. 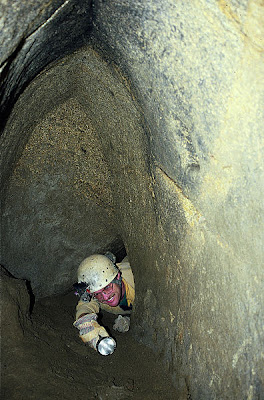 I'm wondering if this was a place to store grains and supplies that they were trying to hide from their liege.