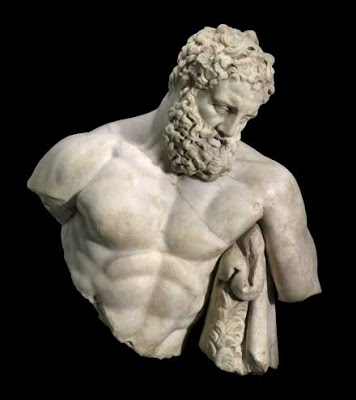 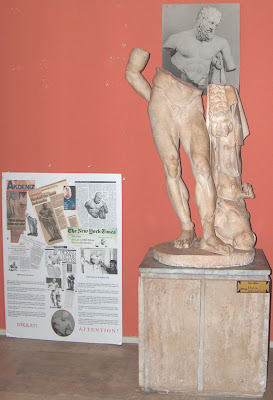 The Museum of Fine Arts in Boston has finally agreed to return to Turkey the top half of a famous statue of "Weary Herakles." It has been known for twenty years that the two halves go together, and that the story offered by the antiquities dealer from whom the MFA bought the top half was a lie, but excuses were made:

Though there is no documentation detailing the discovery of the MFA’s half, Turkish archeologists say they are sure it was found in the same place - and around the same time - as the lower section of the statue. That place is Perge, a city about 10 miles east of Antalya and, in ancient times, a wealthy center of cultural and political life. Today, Perge is a huge tourist attraction, home to one of the country’s longest-operating archeological sites. Digs have been underway since the 1940s.

It was in 1980 that Turkish archeologists found the southern baths where, in about 15 feet of rubble, lay a dozen statues. One of the discoveries was the bottom section of “Herakles,’’ a Roman statue in eight pieces. The top half was probably in the area at the same time, though it wasn’t spotted by the archeologists, according to Inci Delemen, a professor at Istanbul University and today the deputy director of the Perge excavations. In a recent phone interview, Delemen said that security was lax in those days, and that she suspects one of the crew members found the upper half and hustled it out of the site. It is simply too much of a coincidence that the top half emerged in public in 1981, one year after the discovery of the bottom half, said Delemen.

The MFA purchased the piece in 1981 . . . from a German dealer named Mohammad Yeganeh. As for the top half’s origin, Yeganeh told the collectors that it came from “his mother’s collection and before that from a dealer in Germany about 1950,’’ according to MFA records.

It’s an explanation that has always rung hollow for Delemen and other experts.

I am not normally a huge fan of repatriating every artifact back to its country of origin, but this seems like a clear case to me. The artifact was obviously stolen, and I think the two halves ought to be reunited.