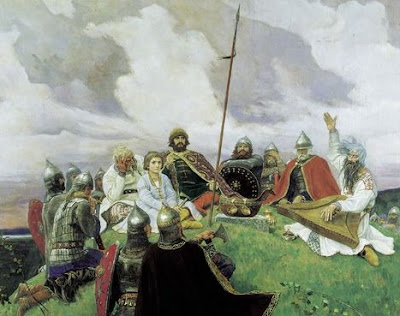 The death of Amy Winehouse set me musing on a topic I have been thinking about on and off all year, the connection between madness and art. I spent much of this spring immersed in old Irish and Norse literature, reading ancient lays about gods and heroes. In those traditions it is pretty much assumed that a poet will be a strange character, if not an actual madman roaming the woods in animal skins. Artistic creation in Old Europe was related to the shamanistic reveries of holy men. The poet sang what he had seen on journeys to the other world, or what was dictated to him by divine spirits, and openness to such visions was not part of normal life. Siberian shamans of modern times are notorious for their strange behavior -- cross dressing, speaking in riddles, eating strange foods, exploding in sudden bursts of anger or falling to the ground in fits. Their huts are often at some distance from the village, and in any case they spend much of their time alone. Poets who were part of this tradition had to be "inspired," that is, entered by a spirit, and that meant cultivating a lonely relationship to the spirit world.

Everyone can come up with a long list of artists who were pretty whacky, especially for modern times when we know a lot about them. I think this is an important point about people like Dickens; if we knew just the outlines of his career he would seem rather normal, and it is only the detailed record of his life that allows us to see his struggle with depression. We have no evidence that Shakespeare was crazy, but then we know hardly anything about him. Of course, this applies just as much to other kinds of people as to artists. What percentage of people in the nineteenth century were crazy as we understand it? When I read about Victorian slums, I see whole communities of mentally ill people treating their diseases with the only drug available, gin. Part of the reason we know so many artists were crazy is that we know so much about their lives and thoughts.

In recent times there have been several interesting studies relating creativity to mental illness, especially to bipolar disorder. One theory is that art springs from the artist's efforts to hold his or her troubled mind together. Art is thus a "force for consolidation" (Anthony Storr) in the mind. This explains to some extent the pattern of alteration in some artists' lives between episodes of mental illness and periods of creativity: the mad impulses are always there, but sometimes they can be tamed and sometimes they overwhelm the mind. Recent genetic studies also suggest links between creativity and mental illness. No genetic variants have yet been discovered that make everyone who has them schizophrenic, but there are variants that are more common in schizophrenics, and people who have these variants but are not visibly crazy score higher on tests of creativity.

I tend to think that since the belief that poets are madmen is at least 2000 years old and still going strong, there must be something to it. Just counting up artists who struggled with mental health issues can certainly be a depressing exercise. Or perhaps instead it should cheer us that so many people have transmuted their pain into our joy.
Posted by John at 7:05 AM

"We Poets in our youth begin in gladness; But thereof come in the end despondency and madness."