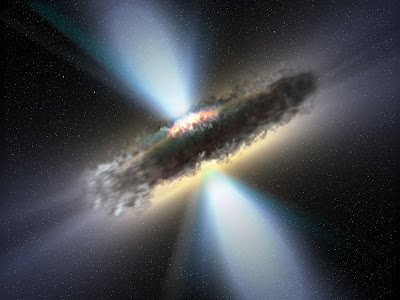 George Chapline says black holes don't exist. As he notes, black holes are a consequence of Einstein's relativity theory that has never been reconciled with quantum mechanics. Not only that, but new thinking on the "dark energy" that seems to permeate the universe would require a major modification of black hole physics, since dark energy is a repulsive force. One model of dark energy equates it with the "vacuum energy" of space, so as any object was compressed by gravity to black hole densities, this energy would increase until its force balanced out that of gravity:

More deeply, there are fundamental reasons why no compact object can be a black hole. The problem is that solutions of Einstein’s general-relativity equations that contain event horizons are inconsistent with quantum mechanics. For example, these spacetimes do not possess a universal time, which is required for quantum mechanics to make sense. Astrophysicists came to accept the idea of black hole because the gravitational collapse of sufficiently large masses cannot be stopped by ordinary means. But Pawel Mazur and I realized some time ago that quantum gravitational effects modify the collapse process.

Ordinary matter will be converted into vacuum energy when it is compacted to the point where general relativity predicts that an event horizon would begin to form. In contrast with ordinary mass-energy, vacuum energy is gravitationally repulsive, so it would act to stop the collapse and stabilize the object.

According to Chapline, his "dark energy star" model can explain the powerful jets of plasma we see shooting away from suspected black holes, but the black hole model cannot.

I obviously don't know enough physics to evaluate Chapline's ideas, but I have long been suspicious of the whole notion of black holes. "Theory predicts" is never a very good reason to believe in the existence of something, especially something that by definition can't be seen. General relativity is a very powerful theory, but it cannot be reconciled with quantum mechanics and so it is unlikely to perfectly explain everything, and I suspect that it breaks down under black hole conditions.

Cosmology is in flux right now. Our old models have broken down and the evolving picture of dark matter and dark energy and what all is interesting but as yet far from convincing. I am glad to see physicists questioning old understandings like black holes.
Posted by John at 1:30 PM