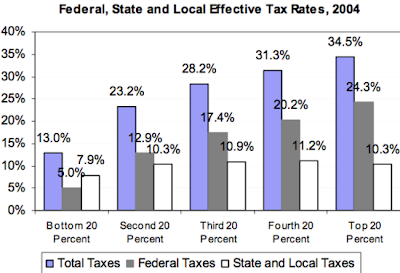 It has become a right-wing talking point that poor people pay no taxes, but it isn't true.

It is true that 46% of Americans pay no federal income tax. But that's because their incomes are low; for example, about 22% of the people paying no income tax are retirees living solely on Social Security. According to Donald Marion, only about 10% of that 46% are people with decent incomes who avoid taxes through high deductions and the like.

As far as I am concerned, Republicans upset that so many Americans pay no taxes should work on raising the incomes of poor people instead of cutting taxes on the rich.
Posted by John at 9:13 AM