Baboon Society and the Pleasures of the Middle 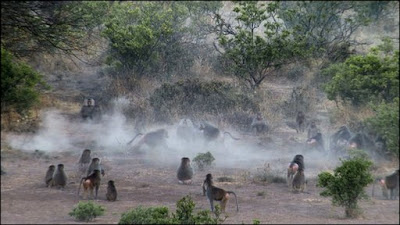 Like most social animals, baboons have a highly structured hierarchy dominated by leaders that biologists call "alphas." Among females rank is mostly inherited from the mother, but males have to fight for their positions.

Early pictures of baboon society made it seem like any male would want to be an alpha. They ate the best food, forced other baboons to submit to them, and got the most mating opportunities, especially with high-ranking females. (Which matters because the high ranking females get more food and are more successful at raising children.) When biologists started measuring the levels of stress hormones (glucocorticoids) in baboon feces -- "Daddy, what do you do at work?" "Well, I follow baboons around and collect their poo" -- they discovered that low-ranking baboons had high levels of stress hormones. This is presumably because they were nervously tip-toeing around the high-ranking animals, hoping not to get bitten or scolded, desperately hoping some low-ranking female would defy the alpha to sneak off and have sex with them. Higher ranking animals had less stress.

Now Laurence R. Gesquiere of Princeton and his colleagues, armed with the biggest-ever collection of baboon poo hormone analyses, says that isn't quite right. The lowest-ranking baboons have high stress levels, but so do the alphas. During times of social turmoil or other crises, the alphas have the highest stress levels in the troop. The lowest stress levels belong to beta males. These animals help the alphas maintain dominance and fight off enemies, they get some good mating opportunities and second crack at good food, they get to bully the lowest ranking animals, and they don't have to worry all the time that one of their sons is going to attack them and take over the troop.

Sometimes it's good to be king, but generally it is even better to be a minister with a pleasant portfolio.

Incidentally, genetic studies of chimpanzees have shown that the alpha males don't dominate mating to nearly the degree once assumed. Being an alpha male chimpanzee involves a lot of work, especially patrolling the borders of the territory and fighting off intruders, which allows lower-ranking males plenty of time to slip in and offer lonely females food for sex.
Posted by John at 7:22 AM