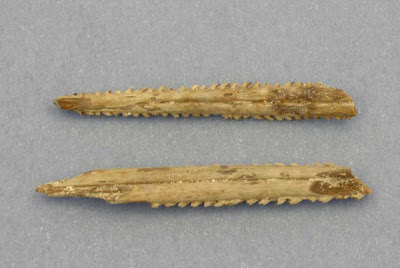 Archaeologists excavating at the Maya site of Palenque have found numerous marine fossils, including these stingray spines, and they have found that slabs of fossil-bearing rock were used in tombs. Did they mean anything in particular to the people who brought them into the city?

In most American Indian cosmologies, the underworld is a watery place inhabited by sea monsters. The earth is often seen as having risen from the depths, or as having been brought to the surface by an "earth diver" figure. One version of the Maya myth:

In AD 775, the Maya lord K’ak’ Tiliw Chan Yoat (Fire Burning Sky Lightning God) set up an immense stone monument in the center of his city, Quiriguá, in Izabal, Guatemala. This monument bears the longest single hieroglyphic description of the Maya Creation Myth, noting that it took place on the Maya calendar's day 13.0.0.0.0, 4 Ahaw, 8 Kumk’u, a date corresponding to August 13, 3114 BC on our calendar. On that day the creator gods set three stones or mountains in the sky after lifting it with the sacred tree of life, from the dark waters that once covered the primordial world. These three stones formed a cosmic hearth at the center of the universe. The gods then struck divine new fire by means of lightning, which charged the world with new life.

This is the version from the Popol Vuh, which may have absorbed a bit of Christianity:

This is the first account, the first narrative. There was neither man, nor animal, birds, fishes, crabs, trees, stones, caves, ravines, grasses, nor forests; there was only the sky. The surface of the earth had not appeared. There was only the calm sea and the great expanse of the sky. There was nothing brought together, nothing which could make a noise, nor anything which might move, or tremble. There was nothing standing; only the calm water, the placid sea, alone and tranquil. Nothing existed. There was only immobility and silence in the darkness, in the night. Only the creator, the Maker, the Forefathers, were in the water surrounded with light. [...] They conferred about life and light, what they would do so that there would be light and dawn, who it would be who would provide food and sustenance. Thus let it be done! Let the emptiness be filled! Let the water recede and make a void, let the earth appear and become solid; let it be done. Thus they spoke. Let there be light, let there be dawn in the sky and on the earth! There shall be neither glory nor grandeur in our creation and formation until the human being is made, man is formed. [...] First the earth was formed, the mountains and the valleys; the currents of water were divided, the rivulets were running freely between the hills, and the water was separated when the high mountains appeared. Thus was the earth created, when it was formed by the Heart of Heaven, the Heart of Earth, as they are called who first made it fruitful, when the sky was in suspense, and the earth was submerged in the water.

Could the fossils put in graves at Palenque have been seen as proof that the earth was once covered by water? The idea has occurred to many people over the ages, including Leonardo da Vinci and one (I forget which) of the pre-Socratic philosophers. This news story is garbled (machine translated?), but this is what it says:

“During investigation conducted at the North Group temples and the structure in front of them, slabs with marine fossils were used by Mayas as tombstones or offered to deities, which is important in the study of Maya cosmogony”.

Until now, 31 fossils from different periods have been discovered. . . .

“We believe that starting from these probable chance discoveries they began forming the idea of the creation of the world that we know thanks to iconographic representations and hieroglyphic texts left behind, as well as myths that are part of oral tradition”, commented Martha Cuevas.

She added that “according to information from Colonial myths, for Palenque people these fossils were testimonies of land being covered by the sea in ancient times; when gods ordered water to retire, their city emerged and the actual era began. Mayas from Palenque had the notion that the Earth was different thousand years ago, and that the world was mutable, subject of transformation”.

Confirming this would mean that they inferred that marine fossils were important because they referred to the moment of the origin of humanity and were related to death; they believed that when people died they returned to their place of origin.

“The fact of have used fossils in funerary contexts is related with the conception they had about the underworld, as the aquatic destiny they reached after dying”, added up the INAH archaeologist.

Martha Cuevas also mentioned that research includes the study of iconographic representations and hieroglyphic texts found at the site, which, in a way, are related with the fossils.

An example of this is the 14th Tableaux. It represents a scene of the mythic trip to the underworld of the Maya ruler Kan Balam II to a remote epoch, 932,000 years back. 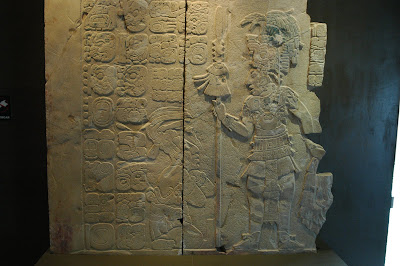 “According to the legend, when Kan Balam II died in 702 AD, his brother and successor K’an Joy Chitam II ordered the creation of this remarkable relief. We can see in the stele a dancing Kan Balam II and his mother, also deceased, Ts’ak Ahaw.

“The bottom of the relief shows 3 levels marked with glyphs that indicate the place where the characters are found; the expressions “nab”, body of water, and “hets’an Kák nab”, calmed sea, refer to the aspect of the world during that mythic age, when everything was water and gods had not ordered land to emerge”.

“Painted on vessels we have found representations of fish species, shark teeth and stingray spines similar to those found in fossils”, she concluded.

That can't be quite right, because the basic creation myth of land being raised from the water is distributed around the world and must be tens of thousands of years old. But I can certainly believe that marine fossils were venerated as signs that the myth was true.
Posted by John at 8:26 AM