Thomas Edison and the Talking Doll 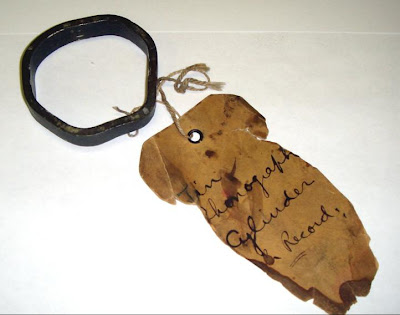 The National Park Service has in its possession the metal ring above, which was found in 1967 in the desk of Edison's secretary and was know to be a cylinder recording. But because it was so distorted, they couldn't play it. Until now:

The metal record is significantly bent out of its original round, cylindrical shape. For this reason, curators at Thomas Edison National Historical Park were unable to play the recording using conventional methods. At the Lawrence Berkeley National Laboratory, Senior Scientist Carl Haber and Computer Systems Engineer Earl Cornell used a three-dimensional optical scanning technology developed during 2007-2009, in collaboration with the Library of Congress, to create a digital model of the surface of the record. With this digital model, they used modern image analysis methods to reproduce the audio stored on the record, saving it as a WAV-format digital audio file. They were able to recover all but the first syllable of the first word of the recording.

In search of a market for his invention the phonograph, Edison first attempted to make talking dolls during 1888. The prototype model described in laboratory notes and newspaper articles between September and December of that year was distinctive for using a record made of solid tin. In November 1888, the New York Evening Sun announced that Edison's talking dolls had just been "perfected," and that "nothing remains but to manufacture them in large quantities." No commercially viable method of duplicating sound recordings had yet been developed, so Edison hired women with suitable voices to make as many records as he thought would be needed once his talking dolls were put on the market: "There were two young ladies in the room...who were continually talking to the tiny speaking machines, which a skilled workman was turning out in great numbers." . . . It was more than a year later, in April 1890, when Edison placed a talking doll on the market. By that time, however, he had switched the design to use records made of wax rather than tin. The dolls failed to sell because they broke too easily -- due in part to the fragility of the records. It is unclear why Edison switched from tin to wax records for the talking doll.

People always want new technologies to be used for politically or spiritually profound things, but mostly they get used for stuff like talking dolls.
Posted by John at 10:27 AM