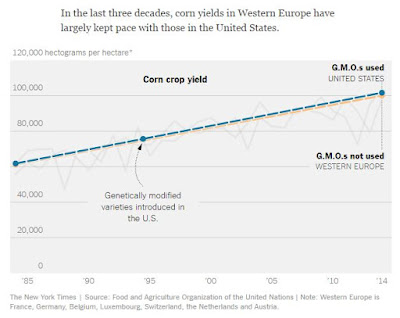 The standard story of genetically modified crops has been the promise of greater yields and less pesticide use vs. the fear of unintended and possibly awful consequences. Danny Hakim has a fascinating piece in the Times arguing that so far GM crops have not performed any better on either metric than standard varieties. Check out the graph above, which shows that corn yields in the US are essentially identical to those in Europe, where GM seeds are banned. The point is not original to Hakim; he is drawing on a substantial body of research.

It's a very important point, although it may not be the long-term story. At the moment our techniques for genetic manipulation are clumsy compared to what they will be in ten or twenty years. But so far this technology has mainly benefited big agribusiness companies like Monsanto, rather than farmers or the rest of us.
Posted by John at 8:50 PM