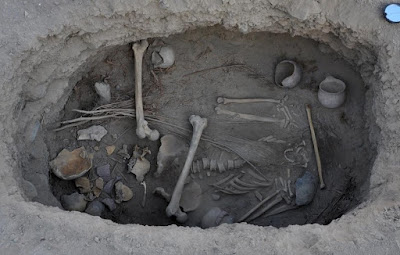 Archaeologists working in the Turpan basin of western China have excavated the skeleton of a 35-year-old man buried with several large cannabis plants:


Thirteen cannabis plants, each up to almost three feet long, were placed diagonally across the man's chest, with the roots oriented beneath his pelvis and the tops of the plants extending from just under his chin, up and alongside the left side of his face.

Radiocarbon dating of the tomb's contents indicates that the burial occurred approximately 2,400 to 2,800 years ago.

This discovery adds to a growing collection of archaeological evidence showing that cannabis consumption was "very popular" across the Eurasian steppe thousands of years ago, says Jiang. 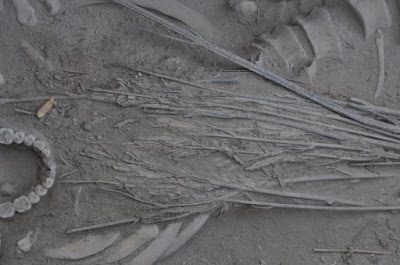 So the Scythians weren't the only ones on the steppe who indulged. Among the Scythians, at least, cannabis was used for religious rituals and by shamans, which makes me wonder if this man was a shaman. Or just a fan.

Do we have any evidence with these burials as to the actual method of use of these plants?

Cannabis is a multi-purpose plant, with incredibile practical utility. It was one of humanity's principle textile resources, used in everything from cloth, to rope, to paper. It's seeds are highly nutritious and have been used as a staple crop, and the body of the plant itself is suited for use as livestock feed. Cold pressing the seeds produces highly useful oil, applicable in treating wood, binding pigments in paints, and can even be burned for stable heat or light.

It is also vital to recognize that cannabis does not necessarily have to be of a strain which is psychoactive. The variety of cannabis used for all of these practical purposes - hemp - is not a suitable recreational drug.

So what evidence, if any, do we have here that these plants weren't simply hemp? Have we found pipes in these burials, or other drug paraphernalia? Artwork depicting some form of cannabis ingestion, either smoking it or eatting it? Anything at all that actually gives us a scientific reason to claim these plants were used as drugs, rather than for any of a myriad of other uses? Have we found traces of THC present anywhere? Or are we making unfounded assumptions here?

In the absence of such evidence, how can we tell the purpose of the plants? Is it not conceivable that a clothworker or a ropemaker might be buried with the plants that made their craft possible? Are there not numerous mundane explanations for the presence of the plants that would be just as feasible, without the assumption of drug usage?

Even in the case of the Siberian shaman discovered with cannabis seeds, where we know from written accounts that psychoactive strains of cannabis were known to the Pazyryks and others of the region, I must skeptically ask if we can confirm that the seeds present in that grave were actually of a psychoactive strain, and were not simply being used in another way - such as symbolically, with seeds being symbols of life and vitality in most cultures, which would make them an apt way to send off someone who died of sickness to their afterlife, where they might enjoy better health.

Skepticism and scientific rigor demands that we not fill in the blanks based on our own biased perceptions, and make claims we don't have direct evidence to back up. Is it possible, in the absence of direct evidence, that these cannabis plants were used as drugs? Certainly it is. But until we can actually confirm that notion, we need to be very careful not to present it as fact - a behavior I see all too often in archeology, as well as other fields. Too many people in scientific fields are too willing to say "We know this to be true", rather than admit "We don't actually know for sure, but this is certainly possible and we'd like to think it was the case".

Incense burners full of cannabis seeds have been found in Scythian tombs. This matches the description of Herodotus, who says the Scythians burned some plant in braziers and inhaled the smoke to have ecstatic experiences.

Alright, but what of these two specific graves in question?

Nothing specific, but burial is a ritual act, and a grave is a ritual context. All sorts of stuff can end up in tombs, but generally grave objects are chosen for ritual reasons. That might be the political side of ritual, like symbols of office and so on; one of the main points of the funeral for an important American Indian was to pass his titles to his political heir. For people whose lives were defined by their jobs, like some craftsmen, the tools of the trade might be placed in the grave.

But most of the time the objects in a grave are chosen for religious reasons. So that is what an archaeologist would assume.