More on Men (and Women) not Working


The “quiet catastrophe” impacting the United States is particularly dismaying because it is so quiet, without social turmoil or even debate. It is this: after 88 consecutive months of the economic expansion that began in June 2009, a smaller percentage of American males in the prime working years (ages 25 to 54) are working than were working near the end of the Great Depression in 1940, when the unemployment rate was above 14 per cent. If the labor force participation rate were as high today as it was as recently as 2000, nearly 10 million more Americans would have jobs. . . .

Since 1948, the proportion of men 20 and older without paid work has more than doubled, to almost 32 per cent. This “eerie and radical transformation” — men creating an “alternative lifestyle to the age-old male quest for a paying job” — is largely voluntary. Men who have chosen to not seek work are two and a half times more numerous than men that government statistics count as unemployed because they are seeking jobs.

What Eberstadt calls a “normative sea change” has made it a “viable option” for “sturdy men,” who are neither working nor looking for work, to choose “to sit on the economic sidelines, living off the toil or bounty of others.” Only about 15 per cent of men 25 to 54 who worked not at all in 2014 said they were unemployed because they could not find work.

Will puts some of the blame on government programs, especially disability, but he has the grace to admit that in this regard the US is doing worse than some countries with more generous welfare systems:


America’s economy is not less robust, and its welfare provisions not more generous, than those of the 22 other affluent nations of the Organization for Economic Co-operation and Development (OECD). Yet America ranks 22nd, ahead of only Italy, in 25 to 54 male labor force participation. 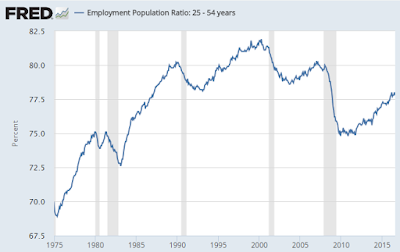 Matt Yglesias has a less moralistic look at the same data in his latest post. As you can see from the graph above, Eberstadt and Will are right: labor force participation is down. But Yglesias says they are wrong to focus only on men:


Eberstadt argues that if you ignore differences in retirement age, American men are now less likely to work than European men, and that male labor force participation has been declining for a few generations now. This is all true. But focusing exclusively on men gives a misleading portrait of the recent situation.

After all, for most of the period Eberstadt considers, the labor force participation rate for women was rising. That reflected women’s growing educational attainment, declining rates of marriage and childbirth, and an increasing tendency for mothers of young children to work. 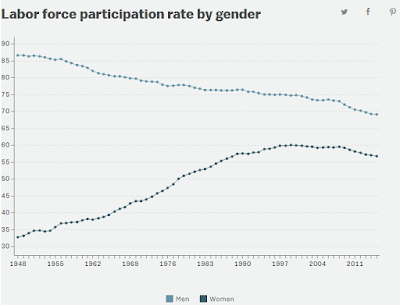 But the labor force participation for working-age women fell after the last recession just as for men, and just as for men it has not yet recovered to where it was in 2007. So this isn't just a problem of American men, but for Americans in general. Yglesias blames a "weak labor market"; that is, the thinks the problem is that we still haven't recovered from the great recession.

My readers all know what I think: Americans are working less because the work they could get is miserable and badly paid. More people will work when either wages rise enough to make it seem worthwhile, or work becomes more fulfilling. I'm not holding my breath for either.
Posted by John at 12:02 PM