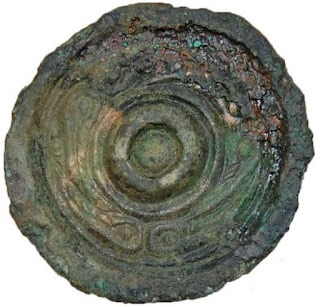 The great classics of medieval Welsh poetry, the works of Taliesin and Merlin, were not written in Wales. They were written in Rheged, a kingdom vaguely placed by later Welsh historians in "the North." Exactly where "the North" was in the 500-700 CE period has been disputed ever since. 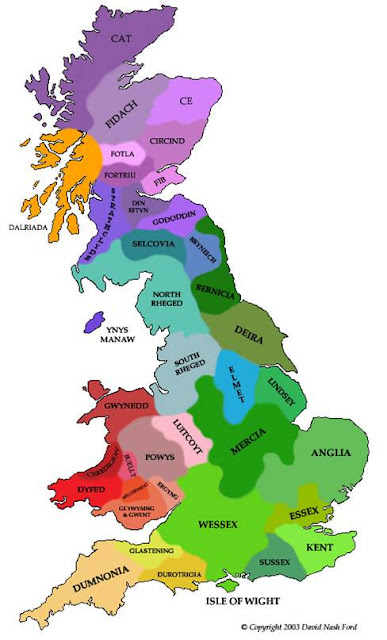 Right now the consensus is shown on this map of Britain in 550, which has North and South Rheged stretching from the northern border of modern Wales around to Galloway in southwestern Scotland. This means that Galloway was part of Rheged, and therefore that its wonderful Iron Age archaeological sites might have played host to dimly remembered kings like Gwrast the Ragged, Cynfarch the Dismal, and Llywarch Hen. 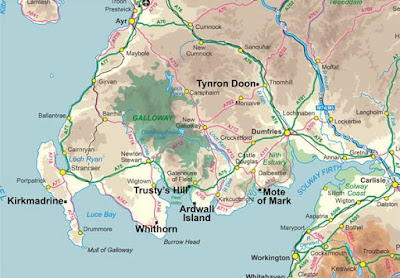 Three hill forts of this period are shown on this map, along with some other Iron Age sites: Tynron Doon, Trusty's Hill, and the Mote of Mark. 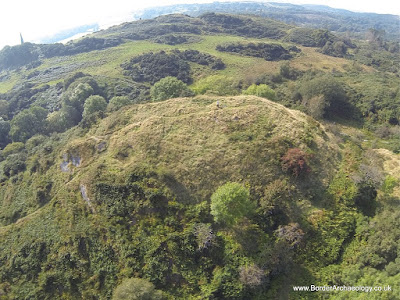 Trusty's Hill is a small fort near Gatehouse of Fleet. Its stone ramparts are "vitrified," that is, they were burned with such great heat that the stones fused together. It has been excavated multiple times, most recently in 2012. A few artifacts of Roman and Stone Age times have been found around the fort, but the recent excavations confirmed that it was built around 500 CE. 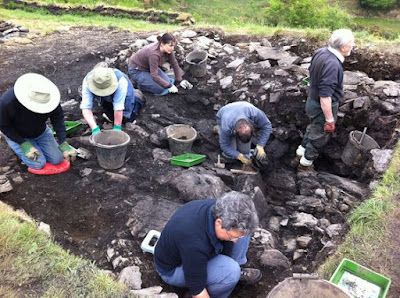 The 2012 excavations produced no spectacular finds but a lot of interesting artifacts. The information on diet was rich: bones of cattle, pigs and sheep that had been chopped up for boiling, charred grains of oat and barley. The nobles of Celtic Britain had golden brooches and knew their genealogies for twenty generations, but their food was pretty basic: boiled meat, roasted meat, apples, oatcakes, porridge. 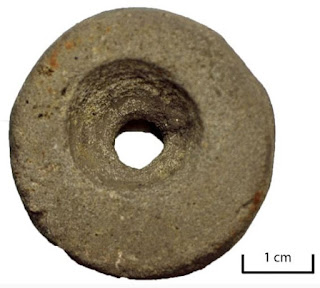 One of the things archaeologists would like to know about hill forts is what people did there when they were not taking refuge from attack. At some forts there is next to no evidence of ordinary life, so these forts were probably built as places of refuge for people who lived in villages nearby. But Trusty's Hill was occupied all the time. The dig produced evidence of craft work, especially iron working: crucibles, clay molds, heating trays, a stone anvil. Evidence of aristocratic finery was also found: a thistle-headed pin, a copper alloy horse mount (top of post), potsherds from western France that might have been wine jars. 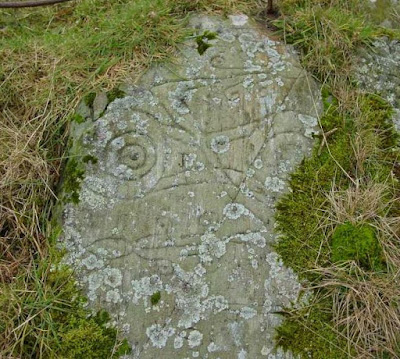 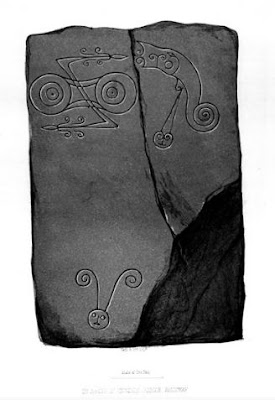 The most famous thing about Trusty's Hill is this stone covered with Pictish symbols, found in a prominent spot near the entrance. Why Pictish symbols at a Welsh hill fort? Intermarriage? A gift? A prize of war, like when Edward I took the Stone of Scone back to Westminster? I lean toward the last. 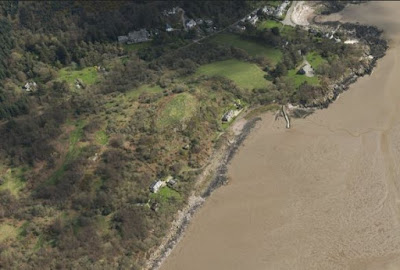 Mote of Mark is just a few miles east of Trusty's Hill, where Urr Water flows into Rough Firth. 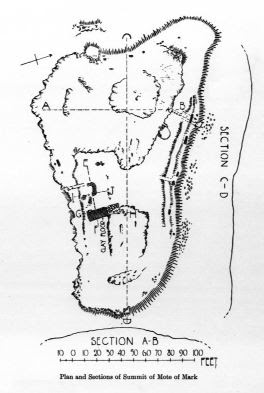 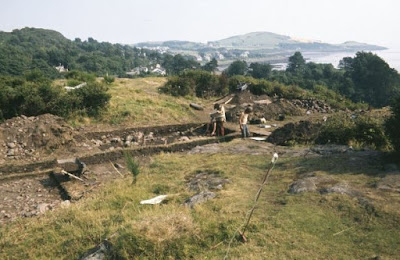 This little hill has also been excavated on multiple occasions, including a major dig in the 1970s, the results of which have recently (2006) been published in one of those completely inaccessible volumes from an obscure press that are the bane of archaeology. Just put it online, people! Forget the damn fat book that nobody will read because nobody can find it! Gack. One of the most important finds was made back in 1913, a collection of mold fragments for casting elaborate metal ornaments. So just as at Trusty's Hill, Mote of Mark was the site of high-end craft production for wealthy customers. 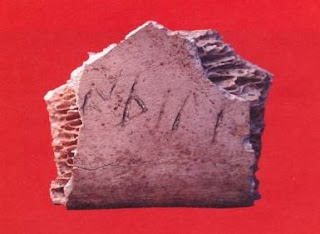 I found this scratched bone on a web page about Mote of Mark, so I assume it came from there, but it had no caption and the file name was a random-looking 12-digit number, so certainty eludes me. 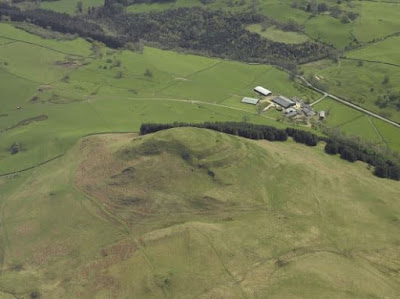 And finally Tynron Doon, a hill fort a bit farther north in the Scaur Hills. This is an ancient fort, built in the pre-Roman Iron Age and occupied into the 16th century. (In fact there was a shepherd's hut on the spot down to around 1800.) Artifacts from the site include several nice items from the 500 to 700 CE period, including jewelry and decorative bosses for horse harness. 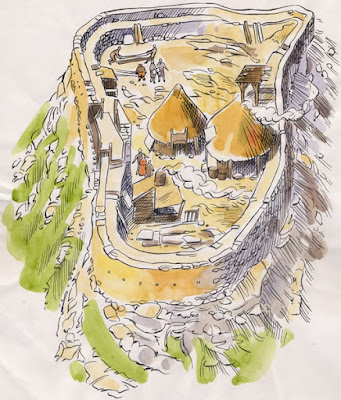 Here in these rough little forts beyond the Wall, in halls not much bigger or finer than huts, Urien and Owein and the rest of the northern heroes drank their mead and listened to their bards chant songs of praise and tales of ancient battles:


Gold on the wall
Bold the assault,
Sin not to press the attack.
One shouting Saxon
Was food for the birds,
High-hearted the war-cry. . . .

According to our sources, Urien and Owein were Chrisitan, but the songs of their bards were still rich with the lore of ancient druids. Taliesin mocked monks in one of his poems ("Monks howl like a choir of dogs") and wrote these famous lines, summarizing the druidical teaching that the universe is a constant process of transformation:

This was the world of the heroes whose memory was kept for a thousand years: simple food in thatched halls, but a mighty pride in their deeds and their ancestry, and a tradition of myth and song to rival any humans ever created
Posted by John at 12:22 PM

What a delightful bath of old, far-off, forgotten things! (I don't want to say unhappy.) Thank you.

Remind me, is it Urien and/or members of his family that Nikolai Tolstoy holds up as Merlin's Christian enemies? I vaguely remember Quest for Merlin that way.