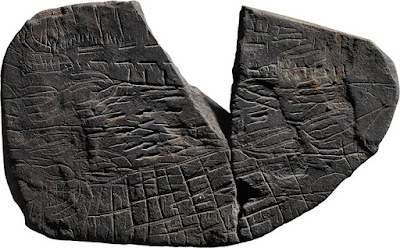 Vasagård is an archaeological site on the island of Bornholm in Denmark, which I wrote about last year. Between about 3500 and 2700 BCE is was a religious site that archaeologists think was dedicated to the sun. The site is in the news again because of the stone shown above, recently found by excavators in an old ditch. An archaeologist named Flemming Kaul thinks it is a map of the island, and that the different types of scratches indicate fields of grain or other types of vegetation. The stone is only about 5 cm long, 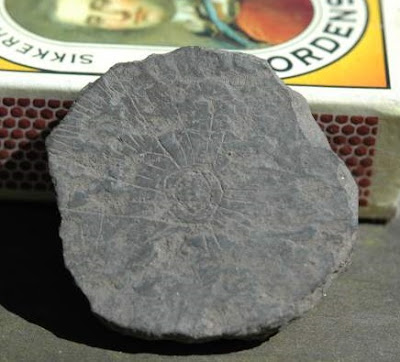 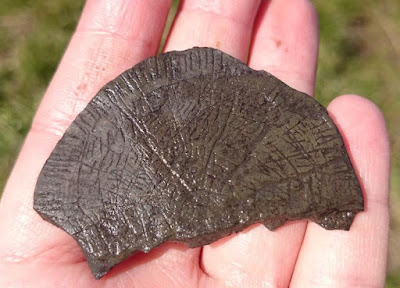 This is going to be controversial because a lot of scratched stones have been found at Vasagård, and the rest have been interpreted as images of the sun. It is true that the alleged map stone looks rather different from the sun stones, but to make solar images and island maps in such similar ways is a bit puzzling. Then again the site was occupied for centuries, and five hundred years is long enough for a lot of things to change. 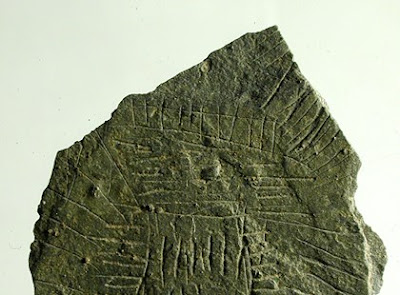 The new map stone is not the first stone from Vasagård that has been interpreted as a map; this one seems to be in the National Museum of Denmark.

If true, this would be really fascinating. Making maps as pictures of the earth from overhead is not natural, and it had to be discovered; the oldest maps I know of are from Sumer and Egypt, and they are younger than these stones.
Posted by John at 12:13 PM

interesting. thanks so much for this!