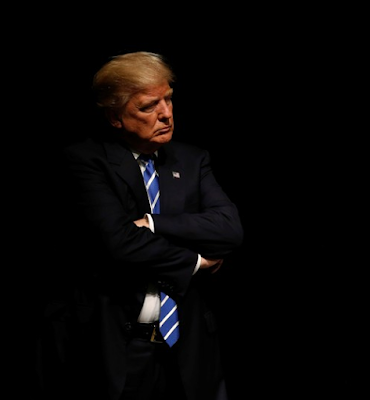 
There is nothing the political establishment will not do, no lie that they won’t tell to hold their prestige and power at your expense. And that's what has been happening. The Washington establishment, and the financial and media corporations that fund it, exist for only one reason, to protect and enrich itself. The establishment has trillions of dollars at stake in this election. . . .

It is a global power structure that is responsible for the economic decisions that have robbed our working class, stripped our country of its wealth and put the money in the pockets of a handful of large corporations and political entities. Just look at what the corrupt establishment has done to our cities like Detroit, Flint, Michigan and rural towns in Pennsylvania, Ohio, North Carolina, and all cross our country. Take a look at what is going on. They've stripped away the towns bare and raided the wealth for themselves and taken our jobs away, out of our country, never to return unless I'm elected president.

The Clinton machine is at the center of this power structure. We have seen this in the WikiLeaks documents in which Hillary Clinton meets in secret with international banks to plot the destruction of U.S. sovereignty in order to enrich these global financial powers, her special interest friends, and her donors.

The most powerful weapon deployed by the Clintons is the corporate media: the press. Let's be clear on one thing, the corporate media in our country is no longer involved in journalism. They're a political special interest, no different than any lobbyist or any other financial entity with a total political agenda and the agenda is not for you, it’s for themselves.

Anyone who challenges them is deemed a racist, a sexist, a xenophobe and morally deformed. . . . They will seek to destroy everything about you, including your reputation. They will lie, lie, lie, and they will do worse than that.

Their agenda is to elect crooked Hillary Clinton at any costs, at any price, no matter how many lives they destroy. For them, it's a war. And for them, nothing at all is out of bounds. This is a struggle for the survival of our nation. Believe me. And this will be our last chance to save it. . . .

The only thing that can stop this corrupt machine is you. The only force strong enough to save our country is us. The only people brave enough to vote out this corrupt establishment is you, the American people.

An impressive performance, considering the position the man is in. It shows that there are certain advantages in Trump's crazy approach to politics. If Mitt Romney had been accused of groping somebody, and he had responded by calling it an elite media conspiracy against him, everyone would have laughed at his desperation. But for Trump this seems perfectly natural.

Two things stand out for me: First, Trump has waved away any notion that he can be reported on by the press. Media outlets either repeat what he says, or they're part of an elite conspiracy out to destroy America. There is no reliable source of the truth except Trump himself.

Second, the retreat from technical questions to moral ones that I keep harping on. It doesn't matter what anyone knows; all that matters is if you are on the right side. All we have to do to break the power of the evil elite is elect somebody who is on to their scam.
Posted by John at 7:30 PM