Jack Cade, the Earl of Trump, and the Sheriff of Milwaukee Countty 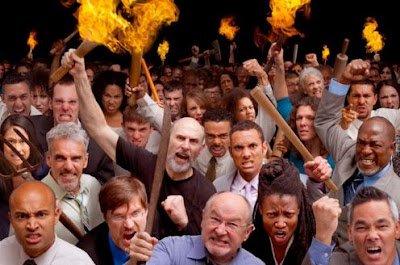 
It's incredible that our institutions of gov, WH, Congress, DOJ, and big media are corrupt and all we do is bitch. Pitchforks and torches time.

The picture above was attached. 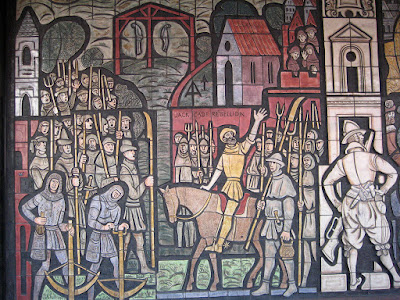 Jack Cade led a revolt in England in 1450, during which he may have commanded as many as 10,000 men; these days he is best remembered for his appearance in Shakespeare's Henry VI, when one of his men says, "the first thing we do, let's kill all the lawyers." But Jack Cade's revolt was more than Shakespeare's "rabblement." He had knights and at least one Member of Parliament in his force, and they drew up a written list of 15 grievances for presentation to the king. When they briefly seized London they held trials for unpopular ministers and beheaded two of them as traitors. Comparing Cade with our own angry rebels, I have been wondering how much things have changed, and how much of populist anger is eternal.

It seems to me that Cade's complaints have much in common with those of Trump and his men. To begin with, there is the shame of defeat in foreign wars. Part of the background to Cade's revolt was that under the unwarlike Henry VI England had lost much of the land in France that had been won by his mighty father, Henry V. Many Englishmen who had been living in France had recently come back to England bearing tales of woe. Soldiers from the defeated English army had also come back, muttering against incompetent commanders and spreading rumors about treachery and bribes. Like Trump, Cade's followers seem to have wanted as much as anything else for England to be great again.

The other main target of anger was royal justice. The rebels all believed, like most rebels, that the king's courts were rigged and his judges corrupt, so that none could get justice without paying bribes. Their proclamation says:


The law serves of nought else in these days but for to do wrong, for nothing is spread almost but false matters by color of the law for reward, dread and favor and so no remedy is had in the Court of Equity in any way.

But while demanding that the king start winning his wars, they objected to the taxes needed to pay for fighting. Also, and this I just learned today, they complained about the royal debt:


The king himself is so set that he may not pay for his meat nor drink, and he owes more than ever any King of England ought, for daily his traitors about him where anything should come to him by his laws, anon they take it from him.

Sound familiar? the king is not poor because his people won't pay their taxes, but because corrupt traitors around him steal all his money. Wise men would like to advise the king, but


The false traitors will suffer no man to come into the king's presence for no cause without bribes where none ought to be had.

To me that sounds exactly like contemporary complaints against lobbyists.

Another thing about Cade that intrigues me was the rumors that swirled around his ancestry. Cade seems to have been a common man, and he certainly could not read. But at times he styled himself John Mortimer, and a rumor spread that he was of the ancient Mortimer family, and therefore descended from kings. Another report had it that he was the bastard son of Henry V. This ambivalence about the rebel's status seems to come up again and again in tales of revolt; we want our leaders to be of the people, and to speak the people's language, but somehow we want them to have the magic of great ancestry as well.

To Cade's men, the problems in royal government were not the result of incompetence or bad luck, but of treason, and the right remedy was to find those responsible and hang them. "Lock her up" seems a bit wimpy by comparison, but it springs from the same analysis. If the people are suffering, it can't be because the whole world economy is shifting; it must be because their money is being stolen. If the nation's armies are defeated, it can't be because our enemies' commander is Napoleon; it must be treason. It either case, someone must pay.

This is of course the exact thing I hate about contemporary populism, the way it turns all problems into moral problems. In the 1400s England conquered half of France because they happened to have a great war leader for a king when France had an incompetent ruler and an aristocracy riven by civil war. When the situation was reversed, and it was England that was divided under a bleating sheep of a ruler, the French were victorious. It's simple, actually. But someone murdered the Duke of Suffolk, the defeated commander of England's armies, and Cade's men beheaded two more ministers for their part in the disgrace.

I think the feelings that drive some angry Americans are age old: an insistence that every wrong is a crime for which someone must be punished, and a refusal to accept that sometimes things just go badly. A conviction that the success or failure of the nation's armies is a reflection of the moral character of the rulers. A belief that real justice is something different from what courts and lawyers produce. And a longing for a great king, who is also a man of the common people, to come and save us from our woes.
Posted by John at 7:26 PM

"I think the feelings that drive some angry Americans are age old: an insistence that every wrong is a crime for which someone must be punished, and a refusal to accept that sometimes things just go badly. A conviction that the success or failure of the nation's armies is a reflection of the moral character of the rulers. A belief that real justice is something different from what courts and lawyers produce. And a longing for a great king, who is also a man of the common people, to come and save us from our woes."

Basically certain people grow up hearing fairy tales, and never learn to distinguish them from reality.

How many medieval knights grew up hearing tales of chivalric deeds and the court of the majestic King Arthur, only to eventually find that the actual workings of feudal life were full of highly questionable and entirely non-chivalrous behavior?

How many modern Americans grew up watching films full of gung-ho macho "cowboy" figures who ride into other people's complex situations and neatly sort them out by winning over the "good guys" to their side with swaggering confidence and charisma, and beating the "bad guys" with nothing more than gruff determination and a healthy dose of casual violence?

Is it any wonder that when real world problems can't be sorted out quickly and simply, many Americans respond by thinking we just need to send in a hero figure to take charge, win over the "good guys", beat the "bad guys", cleanly tie up all loose ends and solve all problems to everyone's satisfaction, and then ride off into the sunset while the grateful common folk see him off with cheers, waves, and an uplifting epic soundtrack?