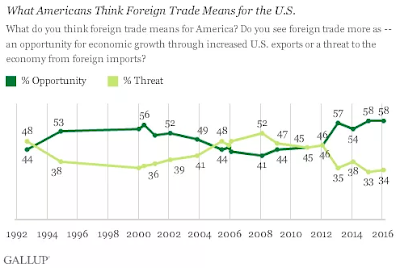 Love this chart from Gallup showing that most Americans favor foreign trade when the economy is good and suddenly think it is dangerous during recessions. And you'd never know from coverage of this election that people in favor of trade are the majority.

One big thing I've noticed about people's perceptions of Globalism is that they think it's all so very new - that it's this distinctly, uniquely modern thing that didn't exist just a few decades ago, and that's been foisted upon us by "the liberal agenda".

The reality is that globalization has been occuring for hundreds of years, in different forms. When American manufacturing workers today rail against cheaper foreign labor making their jobs uncompetitive, they forget (or perhaps never knew) that many European citizens historically railed against cheap American labor in the age of colonialism.

The British were just as angry about Americans "stealing their jobs" as many of us are today about China or Mexico or other manufacturing competitors. But did they demand that the colonies be shut down somehow, or that be jobs be magically brought back to Great Britain? No, of course not - they knew that wasn't possible.

Besides - they knew the government was making money off the colonies, which translated into more money the government could spend on running the country properly without having to raise taxes. Sure, some local British industries were struggling because of cheap American labor, but the upshot was that Britain itself was doing much better as a whole. And most Britons knew and appreciated that fact.

The same sort of situation is present today. Certain local American industries may have suffered as a result of trade with places like China, but at the same time our general economy has seen overall improvements because of it. Our economy is more robust with globalization than it ever would be without it.

And yet, we're short-sighted and narrow-minded about the issue. We think if we just shut out the world, we can somehow do better on our own, despite that tactic never once having succeeded in modern history.

One of the things that did in the Viking colony in Greenland (around 1400) was a change in the political situation in Africa that made elephant ivory much cheaper in Europe, driving down the price of walrus tusks.

I did not know that. How fascinating!