New Chemistry that Might Turn out to be Very Important 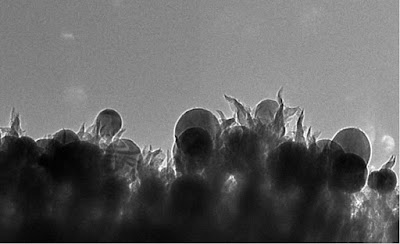 Scientists at the Oak Ridge National Laboratory, searching for catalysts that might help extract carbon dioxide from the air and turn it into something useful, may have hit the jackpot:


Now scientists from the Oak Ridge National Laboratory (ORNL) claim to have produced one of the most usable of all chemicals – ethanol – in a process that is not only cheap, efficient, and scalable, but also conducted at room temperature.

Employing a catalyst made of copper nanoparticles embedded in spikes of carbon, the team found that electricity applied at just 1.2 volts was sufficient to convert CO2 suspended in water into ethanol. In effect, the team were able to produce a complicated chemical reaction, essentially reversing the combustion process, with relative ease and an initial conversion rate of some 63 percent. This was a surprise to the researchers, as this type of electrochemical reaction often produces many different chemicals, including methane, ethylene, and carbon monoxide.

That's an electron micrograph of the catalyst above, showing copper particles and carbon threads.

If this is really scalable at 63% efficiency, it opens up a world of possibilities; for example, you could use this method to store energy from solar power for use at night. I am skeptical that this would be a cost-effective way to remove carbon from the air, but you could certainly use it to create ethanol that would serve as the base material for organic chemistry that today relies mainly on oil.
Posted by John at 1:15 PM