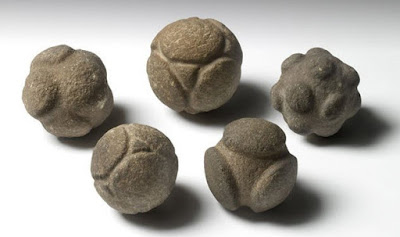 Today's archaeological mystery is the carved stone balls found by the dozens in Scotland, especially Aberdeenshire, with a few scattered across the rest of Britain and Ireland. Most are around 7 cm in diameter, about the size of a tennis ball. 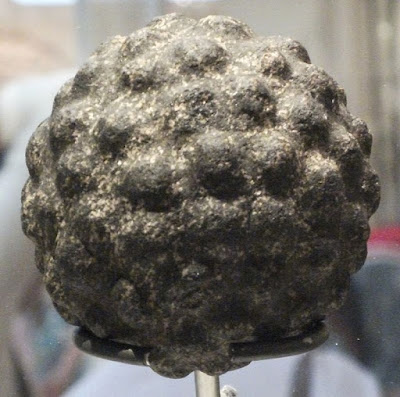 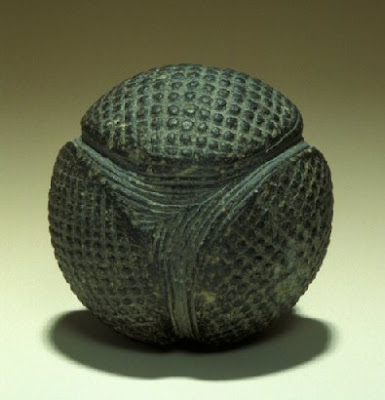 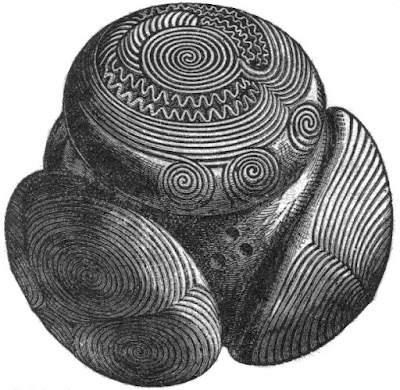 They very quite a bit in how elaborately they have been carved in decorated. This is a drawing of the very elaborate stone found at Towrie.

Most have been found in plowed fields, with no obvious context. So it took a long time to work out how old they are. But gradually enough were found at good Neolithic sites (five at Skara Brae on Orkney, for example) to show that they date to Neolithic times; one sees dates like 3200 to 2500 BCE. In 2013 one was found at the Ness of Brodgar in a very good Neolithic context. 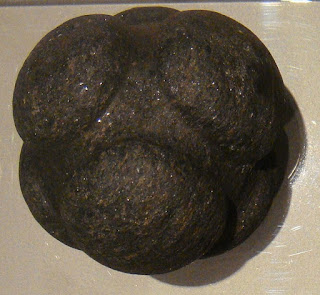 But what are they? Nobody knows. They have a ceremonial look to them, but none have been found in burials or other clearly religious contexts. On the other hand none of them seem to be worn or broken from use, so it is hard to make them into practical objects such as bola or net stones. Theories include dice (for either gambling or prophecy) and a "speaking stone" that would be passed to the person in an assembly who had the floor. My personal favorite theory is that they were used for a sort of bowling game. But these are just guesses.

These are a complete mystery, and don't let anyone tell you otherwise.
Posted by John at 7:51 PM

What about currency? Carved stone money isn't unprecedented, after all - one of my favorite historical curiosities are the Rai Stones of Yap Island.

I could easily see these being used for exchange in much the same way, or even comparable to that of wampum. The value isn't so much intrinsic to the object itself, but is chiefly derived from the effort that went into crafting it. This could even explain the differences in form - the more intricate the carvings, the greater the value. It could also explain the shared general shapes, but differing individual patterns, as individual carvers chose their own details to add to a generally accepted overall form.