Odin with Horns; or are they Ravens? 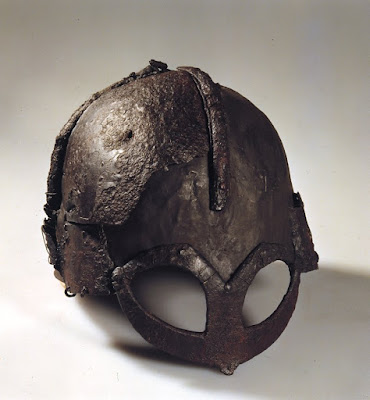 One of those facts that a certain sort of nerd web site likes to throw at you is, "Vikings never wore horned helmets!" Personally I would be very reluctant to say that nobody in the medieval Norse world ever wore a horned helmet, since such things did exist in the ancient world at least, and there are precious few surviving Viking helmets to judge from. But it does seem that normal viking helmets looked like this one. 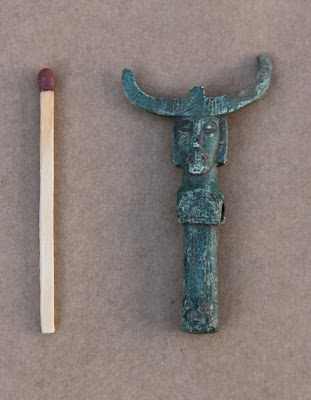 But then there is this, a small Viking amulet recently found by a metal detectorist on the Danish island of Funen. It likely dates to the 8th century. What does this Viking have on his head? Don't rush to conclusions because the antler-things are broken off. 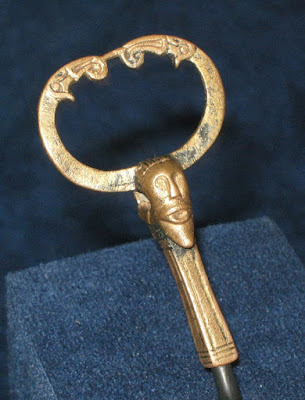 Most likely they originally looked like this, a gold version from Finland. Look closely and you see that the antler things have bird's heads. So this style of figurine is traditionally interpreted as Odin with his two ravens. 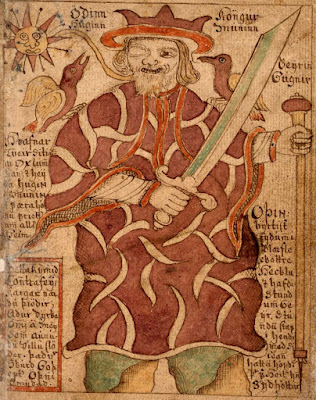 (Odin with two ravens, in case you forgot. From an 18th-century saga manuscript.) 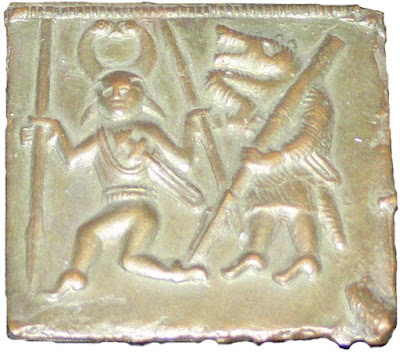 And then there is this famous bronze die found on the Swedish island of Öland, also dated to the 8th century. You can see the bear-skinned berserk on the right, and on the left a figure with with those things on his head. He also seems to have a problem with one of his eyes. So the general view is that he is Odin, and the two horn things represent his ravens.

But, you know, they look an awful lot like horns, and it would not be crazy to interpret this as an image as a warrior in a horned helmet. So while it does seem that the horned helmets are in invention of modern Wagnerians, I would not bet my house on it.
Posted by John at 7:24 AM

I'm almost more interested in that image from the 18th century saga manuscript - that sword depiction seems rather bizarre, and certainly isn't a Viking design.

My gut feeling was that it looked very Asian in design, like certain variants of Chinese dao, but now I'm wondering if it is perhaps based off some of the heftier styles of German kriegsmesser? The straight-tapered backside of the point and the vertically mirrored crossguard are the primary elements which confuse me. Do you have information on who created the depiction? Might help me make sense of what I'm looking at.