Checking in with the Electoral Map 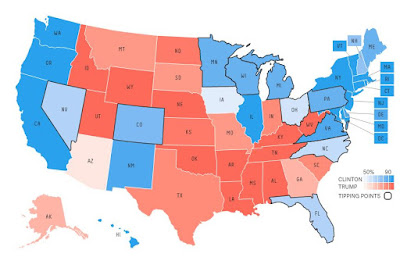 Because after all it isn't voters who elect the president, but states. And despite Trump being a very weird sort of candidate and Hillary being the second least popular major party nominee of recent times, the map looks pretty much the same. In fact this map looks almost exactly like the 2008 map, except that back then Arizona was deep red and Iowa was solid blue. This year there have been some weird gyrations in state polls – for a while Texas and Georgia were effectively tied, Hillary briefly led in Arizona, and Trump has led in Iowa – but as we come down to the final month things look all too familiar. Which raises the question: if Trump couldn't shake up the map, who can? We're back to the complaint that Romney famously made in 2012, that 47% of the country would be against him no matter what he did.

I have seen it asserted that the problem is the state map, and there have been substantial shifts in voter behavior within certain states, but I have seen no real evidence. And it seems to me that any major shift between, say, suburbs vs. rural areas ought to show up at the state level, since the states contain different mixes of suburbs and rural areas.

It seems to me that until the parties change in a fundamental way that shakes people's allegiances, the map is the map is the map, and the election comes down to Florida, Ohio, and a few other places.
Posted by John at 8:16 AM

Yes, it's true, the map has not fundamentally changed since the election of 2000. George W. Bush really was one of the most consequential politicians of our time.