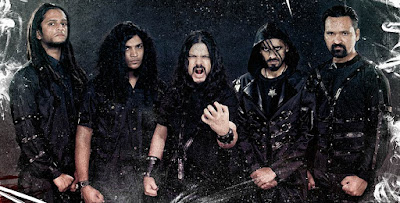 Indonesia is a metal hotbed: Its president, Joko Widodo, wears Metallica and Napalm Death T-shirts. Metal scenes flourish in Latin America, Eastern Europe, Russia and Scandinavia. China got an early seeding of metal 25 years ago when U.S. record companies dumped unsold CDs there. In a male-dominated genre, Russian band Arkona is fronted by singer Maria Arkhipova. Language barriers are less significant in the metal world, which is all about the sound, an often dissonant drone not grounded in any one musical tradition.

A few months ago someone sent me a link to photo essay on heavy metal fans in Nigeria, which gave me a strange sense of seeing the world through distorting lenses.

Picture at the top is an Indian band called Demonic Resurrection.
Posted by John at 11:42 AM

I spent most of my life being baffled by the appeal of metal, until I became pretty good friends with a metalhead whom I and the rest of his friends had affectionately nicknamed "Viking", because he was seven feet tall and redheaded.

We got together with friends one evening, and as the meetup wound down he and I got to discussing music. We started swapping favorite songs on the computer via Youtube, taking turns picking things the other had never heard and having them listen to it. The exchange itself was great fun on its own, but we also talked the whole while about what appealed to us about the different kinds of music we each enjoyed.

Eventually the conversation turned to metal, and I confided that I honestly did not understand it - I asked, "How could anyone take this stuff seriously?"

Viking laughed and replied, "Yeah, no - I get where you're coming from. But here's the secret to metal: even when people are taking it super seriously, they're still not really being serious about it. I mean, yes, some people actually do take it completely way too seriously, but the truth is that the vast majority of metalheads realize how dorky the whole thing is, they just don't care. Metal isn't cool - metal is geeky, and we know it.

Suddenly it all clicked for me. It had never, ever occurred to me that metalheads were simply a variant of my fellow geeks, because I never was able to look behind the facade of seriousness that surrounds the genre. But now that I've made the connection, suddenly I can understand the appeal. I'm still not remotely a metalhead myself, but at least I can listen to the genre more readily now and appreciate it.