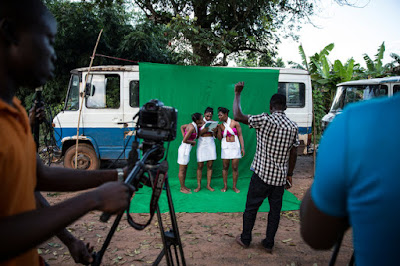 
Nigeria, Africa’s most populous nation, overtook its rival, South Africa, as the continent’s largest economy two years ago, thanks in part to the film industry’s explosive growth. Nollywood is an expression of boundless Nigerian entrepreneurialism and the nation’s self-perception as the natural leader of Africa, the one destined to speak on the continent’s behalf.

“The Nigerian movies are very, very popular in Tanzania, and, culturally, they’ve affected a lot of people,” said Songa wa Songa, a Tanzanian journalist. “A lot of people now speak with a Nigerian accent here very well thanks to Nollywood. Nigerians have succeeded through Nollywood to export who they are, their culture, their lifestyle, everything.”

Nollywood generates about 2,500 movies a year, making it the second-biggest producer after Bollywood in India, and its films have displaced American, Indian and Chinese ones on the televisions that are ubiquitous in bars, hair salons, airport lounges and homes across Africa.

The industry employs a million people — second only to farming — in Nigeria, pumping $600 million annually into the national economy, according to a 2014 report by the United States International Trade Commission. In 2002, it made 400 movies and $45 million.

Nollywood resonates across Africa with its stories of a precolonial past and of a present caught between village life and urban modernity. The movies explore the tensions between the individual and extended families, between the draw of urban life and the pull of the village, between Christianity and traditional beliefs. For countless people, in a place long shaped by outsiders, Nollywood is redefining the African experience.

While Nigerian movies used to be distributed largely on videocassette, now they are often streamed by satellite services. Fascinating.
Posted by John at 11:35 AM

I think as time goes on, and as the technology for filmmaking and distribution continues to become cheaper and more robust, we're going to see more and more regional filming "schools" develop, focusing on serving audience desires not covered by traditional mainstream content.

I'm actually surprised we haven't seen a bigger development in our own film industry in this regard - it's easier than ever to make an "indie" film, and now instead of showing it at film osbcure festivals or art house theatres, you can have millions of people watch it online. I would have assumed we'd see a larger number of American non-studio films finding major success by now.

But maybe our level of cultural disparity isn't great enough? Most Americas seem to feel pretty decently served by our mainstream films - we could certainly make improvements in places like diversity, but overall we seem to have our various subcultures fairly well represented already. Compared to places like India and Africa, our issues of cultural represenatation are miniscule.