Can We Bomb Our Way to Peace in Libya? 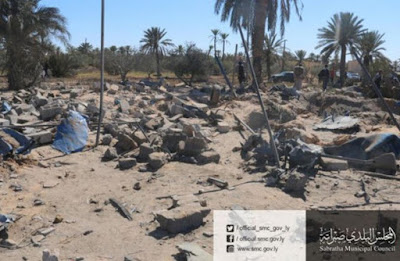 The news from Libya:

“We obliterated the camp,” said a U.S. official who discussed the raid on condition of anonymity. “We're still assessing the casualties at this point, but we hit what we were aiming at.”

“We feel confident that this was a successful strike,” Peter Cook, the Pentagon spokesman, told reporters. “These particular fighters posed a threat to interests in the region, to Libya, and to the United States overall.” . . .

U.S. drones and spy satellites had spent weeks focusing on the walled compound outside the coastal town of Sabratha, about 50 miles west of Tripoli, another official said. The aerial images, coupled with other intelligence, heightened U.S. concern that the militants were preparing to launch a cross-border attack.

The Sabratha Municipal Council, the local government, said on its website that at least 41 people were killed in the bombing, many apparently as they slept. The compound was rented by non-Libyans, including Tunisians, and machine guns and rocket-propelled grenade launchers were found in the rubble, the website said.

So, a “success.” And if I were in Obama's position I might have authorized this attack as well; who could stand back while the Islamic State prepared a major attack into Tunisia or some other country?

But I have to ask: what is the strategy here? Where is the legitimate government of Libya that we are intervening to support, and what is our plan for helping them? Who will be helped if our attacks “degrade” the power of the Islamic State? I don't have any better ideas, but I really think that the odd bombing raid is unlikely to stabilize the situation.
Posted by John at 8:21 AM

Given the situation, I don't see any alternative either. The situation seems to be that, on the one hand, the Islamic State seems both monstrous and dynamic, in a way that doesn't come along very often in history; and, on the other, the American public has no appetite for sacrificing either American blood or significant treasure, and especially not in the kind of multi-decade commitment that would be required to even have a chance at remaking ("stabilizing") one of the stricken societies at issue. Given that, the strategy of damaging ISIS and hoping something turns up seems to me a sensible one.

The price, be it blood or treasure, must be paid eventually.

All dropping bombs does is delay the day of reckoning, ensuring that our children and our children's children will bear the weight of the blood debt we owe and refuse to pay.

Consider how many civilians might have died in this attack. Consider the responses of their friends, family, and loved ones in the coming days, months, years. In their minds, their loved ones died for no reason. Others at that location may have been guilty, perhaps may have deserved death, but these certainly did not.

In their minds, there wasn't even an attempt made to spare the innocent. After all, there was no trial and lawful execution; there was no battle fought; there were not even men with guns rushing into the camp, who might have listened to pleas of mercy - who might have had the decency and basic humanity to separate out the guilty from the innocent. There was simply cold, mechanical, indiscriminate death raining from the skies, in the dark of night, falling suddenly on the unaware asleep in their beds, killing most instantly, horribly maiming the rest.

How much anger and hatred did these bombs breed? How many suffering, desperate people have had their hearts hardened - have been given absolute reason to passionately hate America and the West for the rest of their lives? How many of them will fall prey to anger and helplessness, and turn to violence as their only means of retaliation - the only half measure of justice possible for them?

It has been proven again and again, for over a century now in the modern age, that force of arms does not and CANNOT end terrorism. Any fool can look to the Irish Troubles and witness the repeated, abject failure of military might to put a stop to violence perpetrated by an angry, poor, marginalized population.

And yet we keep repeating the same mistakes - keep thinking that if we just create enough corpses, we can somehow stamp out the problem. But every bullet we fire, every bomb we drop, simply reinforces the pain and hatred of those who lash out against us. We are unwilling to do what is necessary to end this madness, and so it will continue, haunting us, always rising from the ashes every time we think we've bombed it into submission.

Terrorism ends when people no longer have a reason to kill and to die.

G., would you say that we should just stay out of ISIS' way, and let them do what they do? You may be right, and the US has adopted this policy in other places. It may be the more honest course, given that the American public is unwilling to stomach the tax increases and return of conscription that would be necessary to actually play the world policeman role. And if the goal is purely to keep Americans from being targeted by terrorists, it may work. But if we decide to do nothing, we should probably reconcile ourselves to the continued existence and even flourishing of entities like ISIS.

No, I'm not saying that.

Ideally we need to stabilize the region as quickly as possible, with boots on the ground and brains behind the triggers. We need to root out the so called Islamic State while avoiding as much collateral damage as possible; to stop turning uninvolved civilians into corpses or angry radicalized survivors.

And yes, that's going to cost lives, which I recognize we're loathe to spend. But we can't stabilize the region with just bombs. The region has to be controlled, and the civilians need to be protected, not caught in the blastwave. Otherwise, it will collapse into chaos again, and the problem starts all over.

After that's done, we can begin the process of transitioning control to a stable, lasting local government. We've done this sort of thing before. We occupied Japan and Germany, kept the peace, prevented the development of power vacuums, and poured resources into rebuilding. This is exactly what we should have done in Iraq after the fall of Saddam, but we abandoned the project partway through and let everything we had done up to that point become less than meaningless. We didn't see the situation through.

The final stage is reconciliation. Extremists will continue to strike against us during this entire process, but it is vital that we face such violence with resolve and composure. The marginalized communities from which terrorism draws its manpower must be reached out to in good faith, included in the new government of the region, and be made to feel as if they have a meaningful choice to shape their own lives without resort to violence.

Ireland is the textbook example. The Troubles didn't end until the British stopped with their hard-line stance of brutal retribution, and the conditions of life for the Irish began to improve. Once people felt that change was possible without bloodshed, it rapidly began to happen.

Now, do I think any of this is going to happen? No, sadly - I do not. I think modern Americans are too ignorant, emotional, and cowardly to commit the resources and lives required to fix the problem we ourselves created. We're going to keep taking half measures for decades to come, and the next generation is going to suffer because of our failings, and history as it so often does will repeat for a bit, until either some regional power steps in to take control of the situation (which might be very bad for us), or until our descendants either get fed up or can no longer afford not to deal with the issue.

I see that our diagnoses of these conflicts are entirely different. It seems to me extremist groups generate their own motivation from within. The IRA was angry in the first place, not because because of British government retaliation, but because Ulster Protestants refuse to be part of a united, majority-Catholic Ireland. Likewise ISIS' primary targets are Islamic modernists and minorities, especially Yazidis and Shi'ites, and they were attacking these people in a very savage way, long before we started bombing them. They only attack westerners if westerners get in their way. I think we should get in their way, but I'm not the sort of person who thinks that their violence is our fault, or that the point of getting in their way is to keep them from attacking Americans (or even to bring peace; to me the point is to destroy ISIS).

The core of any terrorist group becomes terrorists out of ambition and a grandiose and Manichaean worldview (two things they share with other dangerous groups, like American neoconservatives and Russian ultranationalists). Their recruits may see themselves as suffering and desperate, though often they are simply psychologically and socially uncertain and alienated.