The People of Tinker's Cave 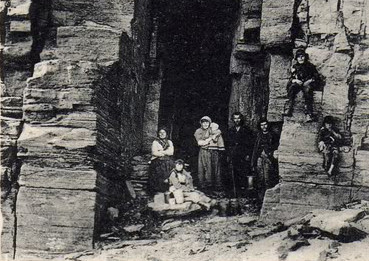 Tinker's Cave is in the far north of Scotland, on the southern shore of Wick Bay. In 1886 an eminent Scottish physician, Sir Arthur Mitchell, visited the cave to study its peculiar inhabitants. He found about 24 people living there, men, women and children, some of them half dressed and others completely naked. They had a peat fire and slept on beds of straw, grass, and bracken, with a few dirty blankets. Dr. Mitchell wrote:


They received us civilly, perhaps with more than mere civility, after a judicious distribution of pence and tobacco. To our great relief, the dogs, which were numerous and vicious, seemed to understand that we were welcome.

The cave-dwellers were tinkers, that peculiarly British group of native-born gypsies.


The Tinkers of the Wick caves are a mixed breed. There is no Gipsy blood in them. Some of them claim a West Island origin. Others say they are true Caithness men, and others again look for their ancestors among the Southern Scotch. They were not strongly built, nor had they a look of vigorous bodily health. Their heads and faces were usually bad in form.

Broken noses and scars were a common disfigurement, and a revelation at the same time of the brutality of their lives. One girl might have been painted for a rustic beauty of the Norse type, and there was a boy among them with an excellent head. 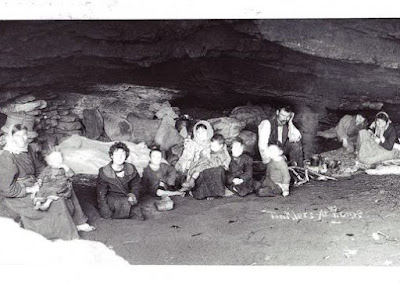 Some tinkers, including some of the men Mitchell met at Tinker's Cave, were actual tin smiths, repairers of metal pots and pans. Others practiced other trades, or labored at whatever physical work was needed.

Like any civilized Victorian, Mitchell was appalled by these unconventional folk:


These cave-dwellers of Wick were the offscourings of society, such as might be found in any town slum. Virtue and chastity exist feebly among them, and honour and truth more feebly still.

Such "offscorings" lived in caves across Europe, and in abandoned buildings, old lime kilns, shipwrecks, and anywhere else they could find shelter. Their numbers were swelled by the industrial age and the collapse of traditional rural communities. Some of Scotland's cave dwellers might have been driven from their homes during the Highland Clearances. Other tinkers were forced off British estates by enclosure, or when the land was sold for industrial or suburban development. Others lost their jobs during industrial depressions and took the road rather than hang around waiting for the mills to re-open. They were the products of an age that no longer had villages or clans but had not yet developed a welfare system that could help those in need. So they went wherever they could find food, shelter, and peace.
Posted by John at 2:18 PM