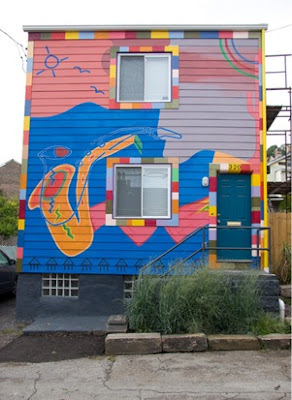 
The arts initiative that struck us in Pittsburgh was bottom-up and frugally operated, rather than a big foundation project. It is known as the City of Asylum project, and its goal is to revive a run-down area of Pittsburgh and make it a haven for persecuted writers from the rest of the world. In the 1990s Henry Reese, the founder of local telemarketing and coupon-book firms, and his wife, an artist named Diane Samuels, became interested in the cause of oppressed novelists, poets, and journalists. By 2004, they had organized and opened the only independently funded U.S. branch of the City of Asylum movement, which was already strong in Europe. (There are two other such cities in the United States, but they are run by universities; Pittsburgh’s is on its own.) They put up some of their own money, and ran fund-raisers and recruited donors for more, so they could buy a series of rowhouses in the once-seedy Mexican War Streets district of Pittsburgh (the streets are named for battles and generals from that war) for their writers and artists to stay for periods of months or years. 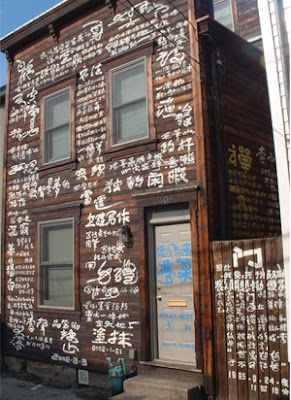 One of the first was a long-imprisoned dissident poet from China. He decided to turn his house into public art, covering it with poems in large Chinese characters. A Burmese writer and her family came, and painted the exterior of their house with landscapes and “dreamscapes.” Strolling down the streets is like being in a graffiti-covered part of town, but one where the style, palette, and theme vary building by building, and the decorations have been done carefully and proudly rather than on the fly. The program has steadily expanded, still locally funded; in the past decade more than 250 poets, writers, musicians, and artists from around the world have put on public performances in Pittsburgh. They have, through the arts, enhanced the city’s international reputation and, more important, given it an expanded conception of itself. Plus, the Mexican War Streets district has become a tourist draw.

The City of Asylum web site.
Posted by John at 6:20 AM