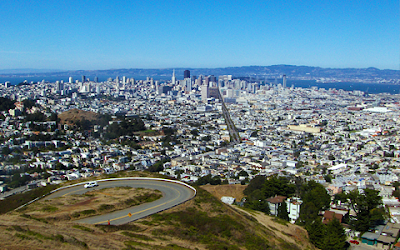 The explanation is pretty straightforward:


The problem can be partly explained by supply and demand. The city has added 45,000 residents since 2010, but has built just 7,500 new housing units.

Housing isn't built in the city because it is basically illegal to build it; most of the city is limited to three units per lot, and even the most innocuous construction meets strong opposition. (See any cranes in that view of the city above?) The city's old waterfront hosts a bunch of derelict warehouses which sit empty because the neighbors won't allow anybody to turn them into condos.

San Francisco has been periodically convulsed for years by protests against high housing prices and the city's treatment of the homeless. But the protesters don't seem to want to build more housing:


Protests aren’t focused on zoning changes or creating more affordability, though. Instead, they’re encouraging the city to ask the NFL for reimbursement for the $5 million San Francisco is spending on city services like police ahead of the Super Bowl, asking the city to divert that money to resources for the homeless population. They’re protesting over alleged police actions that moved homeless residents from the space around Super Bowl City and carrying around signs with swastikas that read iSlave. . . .

At the protest, I talked to a man with a flowing white beard who identified himself as Ron Ron, and who has lived in the Bay Area since the 1970s.

“This is globalization, this is what Obama's brought on, this is what Ed Lee [the mayor] has brought on,” he said. “It’s called capitalism, Darwinism, survival of the fittest.” The city’s newest residents are only concerned about tech and about sports like the Super Bowl, but ignore the homeless who are out on the streets because San Francisco is too expensive, he told me. He disagreed with the idea that building more apartments would help, though. “Everything they build is for rich people,” he said.

Actually San Francisco has a very strict ordinance that requires all new apartment buildings to set aside some units for affordable housing, but since so little is being built, this doesn't help very much.

Hey, if the people of San Francisco want to pretty much halt development and keep their neighborhoods the way they are, as far as I am concerned that is their right. But if they are going to do that, the price of housing will continue to rise. It's not as though anybody has to live in San Francisco; in fact a majority of the people who work there live somewhere else. But simultaneously refusing to allow construction and protesting the high price of housing is just silly.
Posted by John at 6:53 PM

Well from an economic standpoint, there will eventually be a rebalancing as high housing costs drive down immigration and counterbalance it with emigration. But until that market imbalance manages to correct itself, human beings caught in the middle have to suffer.

This is the critical flaw of capitalism. A short term rise in the amount of people wanting to live in San Francisco translates directly into losses for renters and profits for landlords, despite nothing else actually changing.

Landlords aren't suddenly incurring new expenses that drive up the rents they must charge - they're simply exploiting the increased demand to impose as high a price as the market will bear.

The landlords, many of whom don't even live in the city, make pure, effortless profit solely off of the fact that their city is a nice place to live that other people want to move to. Meanwhile, the people who actually live there are suffering economically for the exact same reason. How is that fair or just?

This is deregulated markets in action. Restrictions on rents would directly counteract this issue, protecting the residents from unreasonable rent increases that exist purely to line the pockets of landlords willing to exploit market imbalances.

With all available housing filled, and rents legally prevented from increasing, landlords seeking to profit off external demand to immigrate would instead have to invest in building new housing, rather than simply wringing more value out of their existing renters.

And if the citizenry of the city maintain their stance of leglislating against new housing, then all that happens is landlords gain no new profits, and the population levels remain static. With immigration halted, the demand that drives said immigration becomes irrelevant, and may even directly decrease as a result.

But no one loses out this way. Landlords continue to collect their rents and profit at the same rate they previously were. Tenants avoid financial loss and hardship from facing artificially inflated rents. The city's population no longer growing means public services do not face increased strain. The lack of new construction means the city's extant makeup and layout need not be changed. Everyone wins, no one loses.

Yet we'd rather not impose controls - we'd rather allow landlords to impoverish the citizenry by extracting extra rent based purely on abstract and immaterial factors, and to exploit the instability of market imbalances.

The figures quoted in articles on the high price of housing cover people looking for new apartments; the rent-controlled price is about half the market price.

The law does not cover new construction, because if it did there would be none. Since people lucky enough to have rent-controlled apartments never give them up -- estimates are that more than 20,000 San Francisco apartments are rented by people who live in other cities and keep their cheap SF digs in case they ever move back -- there are effectively none for rent on the open market. You can only get one through some kind of insider dealing, either via an illegal sublet or from an owner you know or can trade favors with. This of course has the effect of raising the price on non-rent-controlled apartments even higher.

This sort of thing is the reason so many cities have given up on rent control. It creates grotesque inequities between old and new residents and Soviet levels of bureaucracy. Sensible housing activists dream about some sort of "moderate" rent control that would limit prices while still encouraging new construction and avoiding the stark difference in price between new and old housing, but as yet nobody has come up with such a system. In New York the full system only applies to people who have been in their apartments since 1971, and not even the di Blasio administration has tried to change that. They want hundreds of thousands of units of new housing, which developers will not build if the rent is controlled, and they don't want to create huge price differences between old and new renters.

Apartments are cheaper in non rent-control cities like Houston, Austin, Atlanta and Dallas than in any place with rent control. This is because those cities have weak zoning and allow developers to build pretty much whatever they want. The price is that you have no control over how and when your neighborhood is suddenly transformed by massive development. (Geography also plays a part, since those southern cities have more room to expand.)

Rapidly growing cities seem to have three choices: encourage massive building that transforms old neighborhoods; limit building and accept very high prices; limit building and use rent control to protect existing renters but accept the unfairness and insider dealing that comes with it.

Other choices are involved here. There are a lot of reasons new construction in cities costs so much, and many of them are political choices: housing codes that reduce the risk of fire, safety rules that protect workers, historic preservation rules protecting historic buildings and archaeological sites, rules that require a certain number of new parking spaces (SF requires one per unit), and above all the elaborate planning and approval process that can drag on for years. What developers have, that they sell to investors, is mainly expertise in navigating the local approval process. This requires them to be politically well connected, so they have become the main funders of campaigns for mayor and county councilman. These days developers often also pay for transportation improvements like intersection upgrades, turn lanes, traffic lights, and even new train stations and highway exits. After all, existing residents don't see why their taxes should pay for things that will be used only by new residents, so the cost is born by the developer and then passed on to renters or homeowners, raising housing prices yet higher.

And then there's the tax issues -- since local jurisdictions in America are funded mostly by property taxes, a city that wants to remain solvent almost has to have a growing tax base.

Anyway I used to support rent control but I don't any more. It seems to me that housing costs are essentially determined by a huge range of factors, many of them political decisions, and that rent control serves as an excuse to avoid facing the consequences of those decisions.