A Roman Tavern in Gaul 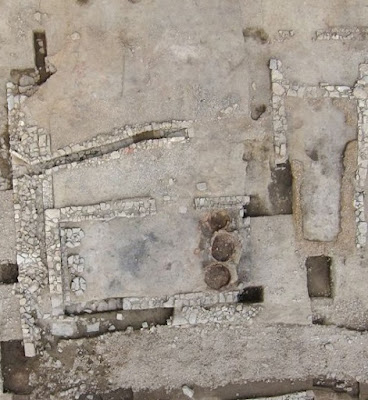 
At first the researchers thought they’d uncovered a bakery. In a room near a key intersection in Lattara, excavations over the last five years revealed the remains of three indoor gristmills and a trio of ovens, each three to four feet across, commonly used to bake flatbread. A home cook had no need for equipment on such an industrial scale.

In another room just across a courtyard, earthen benches lined the walls and a charcoal-burning hearth occupied the middle of the floor. Those features suggested a sit-down joint rather than a takeout counter.

The menu must’ve been extensive. Fish bones littered the kitchen, and bones from sheep and cattle were found in the courtyard. The floors were scattered with shards of fancy drinking bowls imported from Italy, as well as debris from large platters and bowls.

Interesting to note how this operation was set up, with food served in a separate room from the kitchen, where people sat on benches against three walls. Below the kitchen is a street, and above it is a courtyard with a prominent drain. 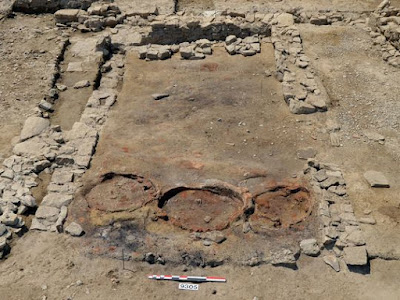 View of the kitchen, with three ovens and what the excavators take to be three stone platforms that supported rotary querns.
Posted by John at 7:32 AM

From what I understand of modern day ruins, usually when people abandon a building they take anything of decent value that's small enough to move.

Presumably the same practice would have been in play in Roman times - so can we surmise that the remnants of fine cups and other portable valuables suggest a rapid abandonment? Possibly a violent one? The article mentions no coins were found despite the apparent purpose of the building, so assuming this was a tavern or restaurant, might that suggest the owner took the "till" (realistically something like a safeboxm I suppose) and left the rest behind in haste?