The Shamaness of Bad Dürrenberg 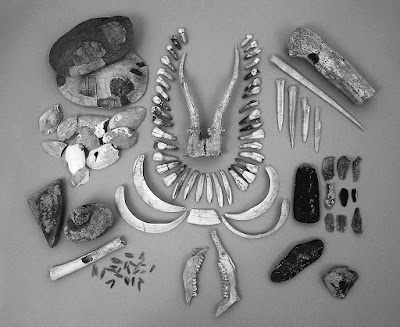 In 1934, workers excavating a canal in Saxan-Anhalt, Germany, near the town of Bad Dürrenberg, uncovered a remarkable grave. It contained the body of a woman aged 25 to 35, sitting upright, and, between her legs, an infant 4 to 6 months old. The entire grave was covered in red ochre. She was surrounded by a remarkable assortment of artifacts, most them made from the bones and teeth of animals. And not just one or two types of animal, but eight: deer antlers and teeth, wolf teeth, beaver teeth, turtle shells, boar's tusks, mussel shells, aurochs horns, and longbones from cranes. 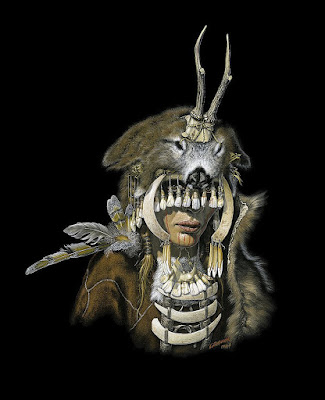 Everyone agrees that she was a shaman. This somewhat ridiculous reconstruction conveys, I think, how very strange she must have looked dressed up in all these animal parts. She must have been very much respected by her people to have been buried in such an elaborate way. Her neck vertebrae had a peculiar anatomy; according to the doctors who examined the bones, she would have been able to crimp the blood flow into her head by holding her head at a certain angle, which might have helped her enter trances more easily visit the spirit realm.
Posted by John at 8:14 AM

Is this getup any more ridiculous than any other ceremonial garb any other human being has ever worn?

Are not US Senators equally ridiculous in their suits and ties, posing stiffly with forced smiles in front of prop flags that never once actually fly?

If the reconstruction is reasonably accurate to how the individual might have dressed, what's the issue? What place is there in studying past people and cultures for judgement and ridicule?

Or am I missing the point, and your complaint is that the reconstruction itself is NOT reasonably accurate, and that is the source of ridicule? If so, apologies for my being desne.

The painting seems to be to resemble those magical realism paintings of American Indians they sell in New Age shops. It may be accurate; obviously we don't know about the skins and feathers, but they seem plausible. It just gives me the vibe of a store full of crystals.

That's probably more a point against cultural appropriation and the "Orientalism" trend of outside cultures to shallowly ape those they consider "exotic" foreigners, than it is a grounds for ridicule of the outfit itself.

It only looks "silly" to us because our culture has done such an awful job of recognizing and contextualizing this sort of thing. It speaks volumes about us as a people that our greatest familiarity with Native American culture comes not from actual Native Americans, but from shysters and profiteers trying to make a quick buck selling cheap imitation garbage through fabricated sentimentality.