Beer and Bureaucracy in Sumer 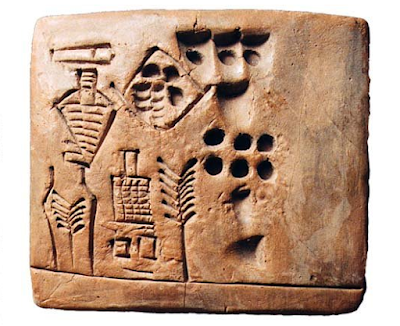 Early clay table from Uruk, before 3000 BCE. Not cuneiform, but something older and simpler. The numbers are written in the standard Sumerian system, but what is going on is described with pictograms:

The present tablet is a masterpiece of pictographic calligraphy. It has just been discovered that 2 hitherto undeciphered pictograms, one like a brick building with a chimney, and the other an ear of barley drawn within a jar or container, illustrates the actual brewing process. Read from right to left we have first the barley delivered, then the brick- building that might be the brewery itself (also with other meanings), and the barley within a jar is the beer. It thus is the earliest representation in history of an industrial process.

Via Archaic Wonder.
Posted by John at 7:35 PM