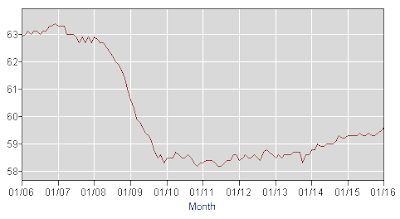 The unemployment rate is now down to 4.9%, which is quite low, and wages are finally starting to rise a little. Great. However, other numbers on the labor market are not so good. Tyler Cowen calls attention to the percentage of people working, which is above. You can see that this number is recovering only slowly from the big drop it took when the recession hit. Nobody really knows what this means. As our society ages, and fewer teenagers work, the number should be trending downward, but it that wouldn't account for a 3.5% drop. It may be that many people responded to the crash by retiring a little earlier than they had planned, and they now have no interest in returning to work. But the loss of workers remains puzzling. Where did they go?
Posted by John at 7:25 AM

I imagine that part of why "unemployment" is so low, but the number of people working hasn't risen, is because unemployment measures only people actively trying to get into the labor force. If some people have simply lost hope of finding jobs and are no longer actively looking, that could account somewhat for the above factors.

This could take the form of people working under the table, or possibly even resorting to criminality to make ends meet. It could also take the form of increased dependency, perhaps with fewer individuals living alone but instead relying on family to support them, which would have a lower total expenditure through shared resources.

There may be other factors as well. Perhaps incarceration is impacting things - while total incarceration numbers peaked in 2008, it may be that a greater percentage of working age individuals are in prison than previously, and therefore unable to seek work. Perhaps military service is contributing in a similar way, as employment figures only count civilians, so individuals seeking reliable "work" might be joining the Armed Forces to survive rather than struggling to find regular day jobs instead.

There may also simply be issues of economic viability of working. Families which previously had two working adults might be struggling along now with only one, and compensating with frugality. This might particularly affect parents, who may not be able to afford daycare for their children which would allow them to both work steady jobs (even with the increased income), and thus one parent must by necessity remain home to tend the children.

There are many possible contributing factors, even beyond those I mention.