More News from the Cursed Massacre Site of Sandy Borg 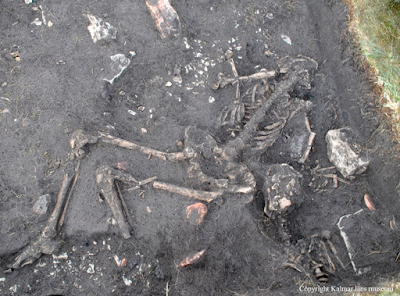 I wrote back in 2013 about the archaeology underway at Sandy Borg on the Swedish island of Öland. Now Archaeology magazine has an interesting article on the excavation that you can read online. The site at Sandy Borg was a small fort that was sacked around 480 CE, its inhabitants massacred. 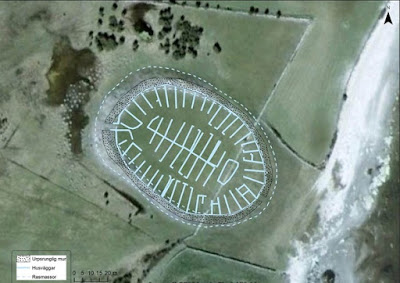 Plan of the fort. The excavators think the fort was destroyed within months of its construction; they call it a "hastily built refuge". Didn't work, alas. The many bodies found in the fort display signs of terrible violence: split skulls, severed limbs. 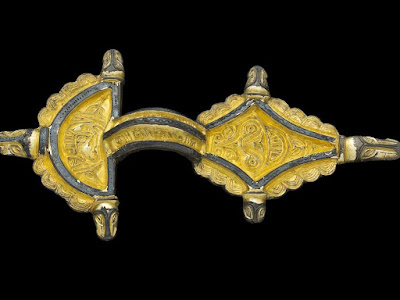 The odd thing about the site is that it was never disturbed after the massacre. The bodies were left lying all around the fort right where they fell, and the killers even left behind weapons and valuables. At that time Öland was one of the most densely populated parts of Scandinavia, so there were plenty of people around. The excavators are finally admitting in print what I guessed three years ago, that they believe that no one went to the site after the attack because it was considered cursed or taboo. I can't think of any other explanation.
Posted by John at 10:30 PM

Is it not possible that people simply had no compelling reason to return to the site?

The pictures of the site show a strip of empty land right next to the ocean. Presumably since this was a hastily erected fortification, it was probably in a little traficked area away from settlements.

There were probably no roads, no remaining standing buildings, no sources of fresh water, no wildlife, no significant arable land - it was likely an empty expanse that wouldn't offer people any proper reason to visit it. Aside from looting the dead, what might compel someone to trek to this site?

And even with looting, there might have been other factors than taboo which kept people away. Hostile forces still camping in the area; more pressing concerns closer to home; even simply harsh weather could keep people out of the region for a reasonable space of time.

Make the site dangerous to visit for a few years until its location is lost to memory and the environment has overgrown or buried the remaining ruins, and suddenly it's as if it never existed.

That's not to say I feel strongly either way as to whether taboo was or was not in play - but you did seem interested in other logical explanations.

The site had an earthen bank that was still visible to skilled eyes in 2005, so it can't have been forgotten soon. And you have to remember that searching old fort sites for treasure was a European pastime throughout the Middle Ages, and most visible sites were looted hundreds of years ago. Of course they often missed things we can recover with modern methods, but for a fort or battle site to show no signs of looting is very unusual.

Would not the pastime of searching old fort sites be centered chiefly on more permanent fortifications?

It's one thing to poke around in the still standing ruins of a long abandoned Roman fort in a prominent location, quite another to scour the site of a hastily constructed fort far off the beaten track - particularly if the site used more wood than stone, as would be expected in a rushed, makeshift construction. And if the site was also effectively unknown in its own time and remained isolated ever since, who would even think to search it?

An earthen bank visible to skilled eyes in 2005 might be easily overlooked by unskilled ones in 480 CE, or in 1480, or any other intervening year. The bank is not particularly high, and seems to blend in fairly naturally with the surrounding terrain. The surrounding area appears to be grazing land for sheep, at least in the present age - likely very little trafficked even at the most crowded of times. Unless someone knew to look for something, why would they bother searching there, of all places?

If the area was cultivated, perhaps then chances would be better for people to have found the ruin. But consider how many Roman sites end up being discovered by farmers tilling land that has literally been worked for millenia without anyone ever stumbling on ruins hidden just scant feet below the surface.

Consider also how many ruins have been well known and picked over, only to turn up even more finds centuries later, missed by previous generations who no doubt believed they'd already discovered everything and thus the site was no longer of any interest.

Consider even that plenty of ruins go unnoticed even in highly trafficked areas - Pompeii lay undisturbed for 1500 years, despite constant high density inhabitation of the Italian region, and the proximity of major urban centers like Naples. (Granted, the site was much more deeply buried in comparison, but still; for being such a highly trafficked area, it seems somewhat amazing no one dug it up sooner, and that it had to be found by accident - twice, hundreds of years apart!)