Silver Mining on the Ancient Aegean 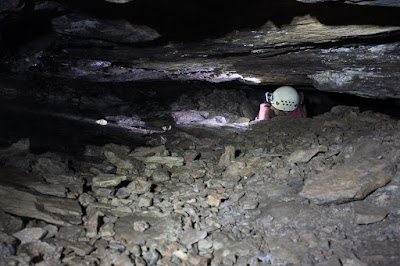 Archaeologists have been exploring the old silver mines at Thorikos in Greece, which were famous in Classical times:


Today, it is difficult to imagine the extreme conditions in which the miners had to work in this maze of galleries. A smothering heat reigns in this mineral environment. The progress of the underground survey requires a constant vigilance in this stuffy space where the rate of oxygen must be permanently watched. Tool marks on the walls, graffiti, oil lamps, and crushing areas give evidence of the omnipresent activity of these underground workers. The hardness of the bedrock and the mineralizations show the extreme working conditions of these workers, for the greater part slaves, sentenced to the darkness and the extraction of the lead-silver ore ... Mapping these cramped, complex and braided underground networks, the ramifications of which are sometimes located at several levels, represent a real challenge in scientific terms.

The finds include stone tools and pottery which may date as early as 3200 BCE, which would be remarkable if it turns out to be true.

The Greeks regarded mining as so miserable and dangerous that of course only slaves would do it; I think that if you had told an ancient Greek that we have a society without slavery, he would have said, "But who works the mines?"
Posted by John at 6:52 AM

I think that if you had told an ancient Greek that we have a society without slavery, he would have said, "But who works the mines?"

Well to be fair, if you told an ancient Greek that we have a society where not only can women vote, but also even non-landed individuals, he would have been similarly flumoxed.

But speaking strictly of the unsuitability of mining for anyone but slaves, it should be noted that by the time we got on board with abolition, mining technology was already greatly advanced in so many ways - too many to list.

It was still hot, grueling labor, but the mines themselves were much safer places in comparison. Miners tended to still be some of the poorest, most desperate individuals, but the job was at least liveable enough to attract willing free participants - perhaps even somewhat on par with other unpleasant vocations, like mucking out stables or working the fields as farmhands.

Actual production was much greater and more efficient, meaning more ore, for less time underground, from fewer workers. Metallurgy itself had advanced so much, meaning less ore retrieved still produced the same or even greater metal output. Advances in mineral exploration meant less time was spent digging "blindly" to reach ore that might not even lay in that direction. Advances in mine layouts meant transporting ore to the surface took less time and was far less labor intensive. And on and on.

But also worth noting is that the opinions of the ancient Greeks are not so much representative of their entire society, but rather only the wealthy and enfranchised elites. Like all ancient societies, theirs consisted overwhelmingly of agricultural laborers producing food, and such individuals either literally were slaves, or they might as well have been. Even their commercial sector, producing goods of metal, leather, wood, and clay, consisted chiefly of workshops operated by slaves. None of these people would have constitued an "ancient Greek" in the sense we speak of them in.