The Minoan Palace at Knossos 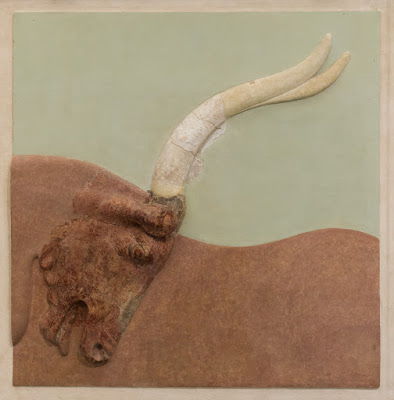 The heroes of my early adolescence were not sports stars or generals, but archaeologists. I idolized the men who discovered the great lost civilizations of Eurasia: Leonard Woolley, Mortimer Wheeler, Arthur Evans. My greatest dream was to lay out trenches across mud brick mounds, to dig down through layers I would designate IIa or VIb, pulling out potsherds I would recognize as Kassite or Middle Helladic, at the bottom finding the gold-filled tomb or the throne room lined with stone reliefs. 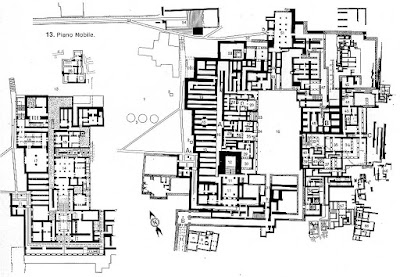 At 14 I knew this map of the great Minoan palace at Knossos by heart and could have told you the names that Evans gave to every room. I was fascinated by the strange connections between this ruin and the myth of the Labyrinth, by the way storytellers had turned the real stone ruin into a tale of monsters and heroes. This, I suppose, has stayed with me more than anything else from that time in my life: my favorite archaeological discoveries are the ones that trace back hints from folk tales and place names to some actual fort or city, dimly remembered. 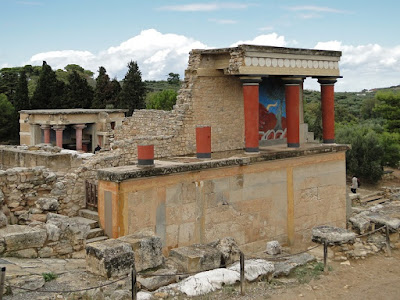 The site of Knossos had been inhabited by Bronze Age traders from around 2500 BCE; the first great palace was built around 1900 BCE. It was one of four such palaces on the island. Excavation by Arthur Evans began in 1900. 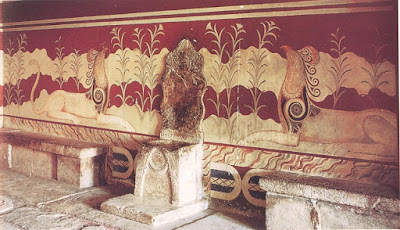 The first palace was violently destroyed around 1700 BCE. Some blame an earthquake or tsunami, while others blame invaders. The palace was then rebuilt. Around 1450 BCE Cretan civilization suffered a catastrophic fall, and most of the island's cities and palaces were at least partially destroyed. The palace at Knossos continued to be occupied until around 1375, when it was finally abandoned. The Minoan collapse used to be blamed on the eruption of the volcano at Thera but the dates don't seem to work out. Based on Egyptian royal records, the date should have been around 1500 BCE, which is 50 years or so before the destruction of the palaces, and radiocarbon dating places the eruption around 1620 BCE. So current thinking focuses on an invasion by Greek-speaking people; after all, the Linear B tablets found in the ruins turned out to be written in Greek. 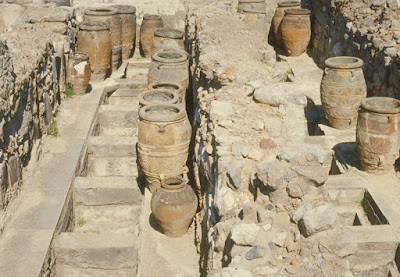 A big part of the Knossos palace was devoted to storage. This was a royal warehouse as much as a seat of government. The centralized storage and redistribution of goods was a key function of many early states or quasi-state societies; we have a very detailed description of how this worked among the Iroquois, for example. Since the Minoans were sea traders, some of the oil, grain and wine stored here must have been shipped overseas. But much of it was probably paid out as wages to servants and soldiers or redistributed to the people at public festivals. 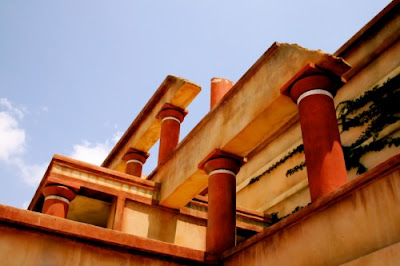 The amount of reconstruction done by Arthur Evans and his colleagues is controversial and has been since it was begun. But I am something of a pedant myself, and I loved it -- the day I spent at Knossos and the museum in Iraklion was one of the best of my life. (It helped that my mother and I toured Greece during the first Gulf War, when the country was nearly empty of tourists.) 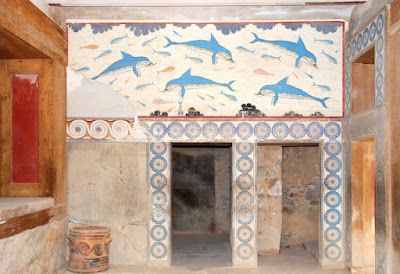 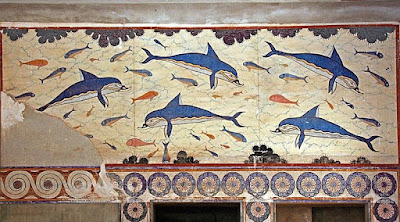 Especially controversial are the frescoes. Evans was capable of imagining whole scenes from small fragments of plaster, and at Knossos (unlike with the wonderful frescoes from Akrotiri) you can't always tell the original from the recreation. 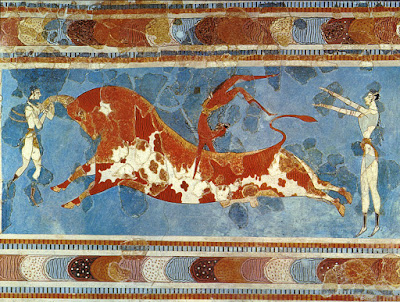 Most controversial of all is the great fresco of the bull leapers. When Evans first published this image it was met with widespread mockery, and many asserted that the leaping he imagined was physically impossible. But of late the skepticism has faded. We now have dozens of artistic depictions of acrobats and bulls from all around the eastern Mediterranean, some of them of indisputable authenticity, and we post-moderns have become much more circumspect about asserting that things can't have happened because they offend our notions of the possible. 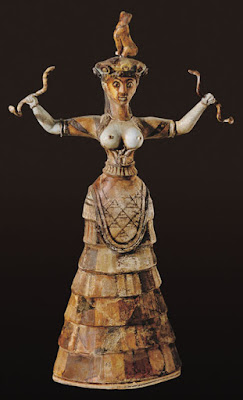 Another controversial image is this one, a restored figurine from the temple repositories of Knossos. 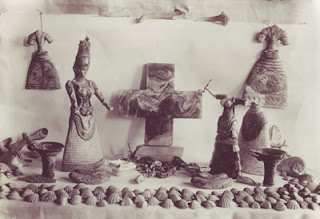 As discovered, this had only one hand and no head; the left hand is just a mirror image of the right, made by modern artisans, and the head is based on other figurines. (Image above is from 1903). But figures in this "mistress of animals" post are always symmetrical, so I think the second snake is a reasonable inference, and surely it had a head? 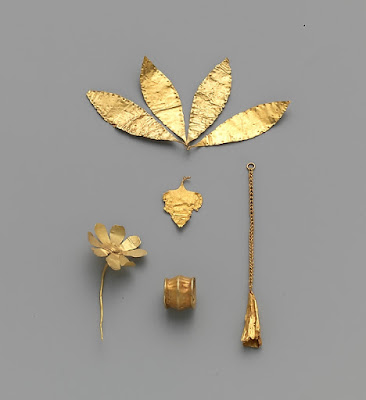 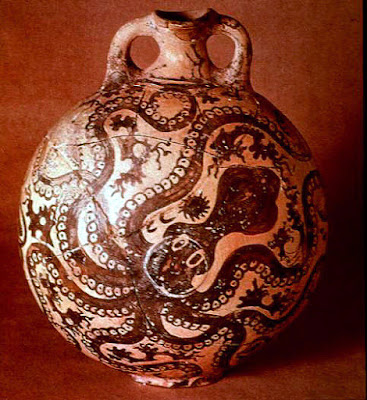 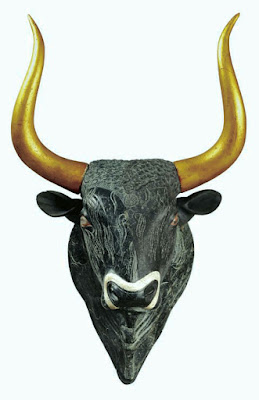 The Minoans captured the modern imagination through their style. The sea creatures, the bulls, the dancing, the elaborate costumes, the bare-breasted goddesses, seemed to come from an age when people loved life more than war, when the mother goddess ruled over the god of battles. And maybe it was so. 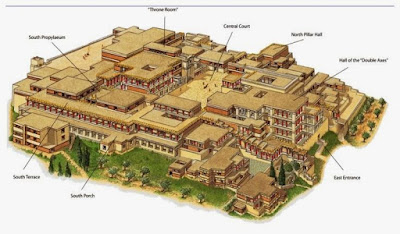 If Arthur Evans let his imagination run a little wild at Knossos, who can blame him? It is place that has been inspirng myths for 3,000 years. 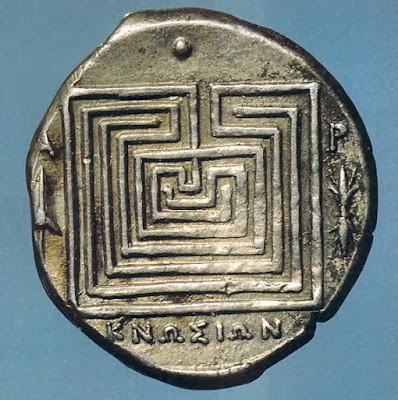