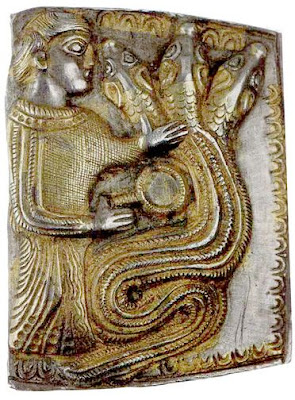 To liven up a snowy day, how about another Thracian treasure? The Letnitsa Treasure was discovered in 1964 by Bulgarian shepherds digging the foundation for a new hut. 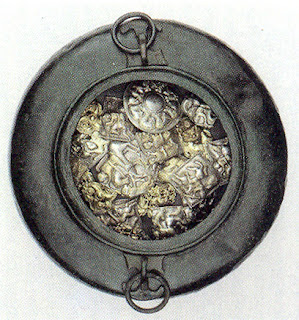 It consisted of 22 gold and silver-and-gilt appliqués that had been placed in a bronze cauldron, which was then buried with its mouth downward. It is generally assumed that most of the artifacts were decorations from saddles, bridles, or other horse furniture. The objects date to the middle of the 4th century BCE. There largest is this lovely phiale (which remember just means a round ornament or shallow dish, but if you call it a "phiale" people will nod and think you know something). 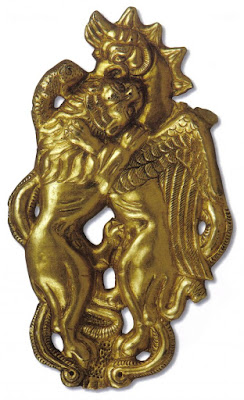 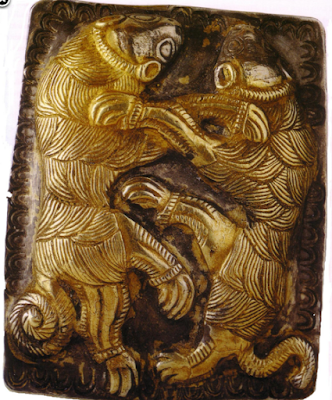 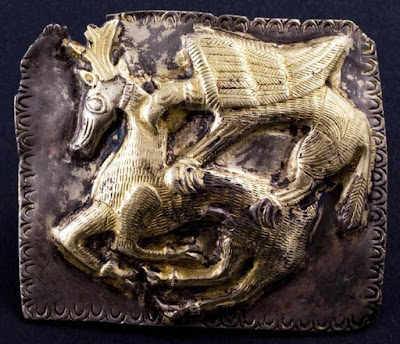 Some of the images show battling animals in the style of the steppes. Thrace after all sat at the meeting place of three great ancient civilizations: the Greeks to the south, the Scythians to the northeast, and the Celts to the west, and all three influences appear in the objects from their treasures. 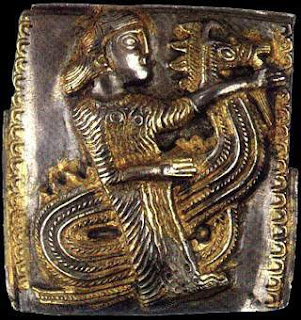 The Letnitsa treasure is well known only to those of us who enjoy the arcana of ancient religion. Some of the appliqués depict what are obviously religious or mythical scenes, notably the goddess or priestess with the three-headed snake (top) and this dragon lady. Sadly the pictures I have found of most of these leave a lot to be desired, but at least these give you the general idea. The snake woman at the top holds a mirror, which seems like a significant detail. Perhaps she is going to show the object its own reflection, like Perseus with Gorgon, or perhaps she is going to catch its soul and thereby get control of it, as in a widespread folk tale motif. 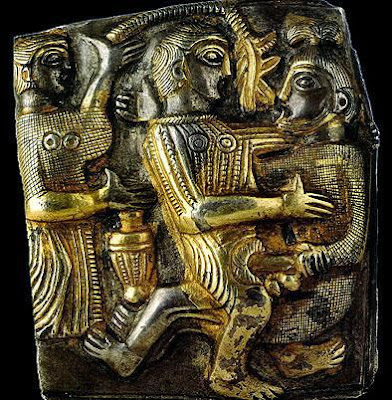 This famous appliqué is said by western historians to depict the hierogamy (sacred marriage) between the mother goddess and the king of Odryssia (the largest Thracian kingdom). Note the king's hair, drawn up into the top-knot that Greek writers always ascribed to Thracian horsemen. But some Bulgarian and other east European historians offer a slightly different interpretation. They say it represents the union of a character they call The Hero or The Son with The Daughter while the mother goddess looks on from the left. 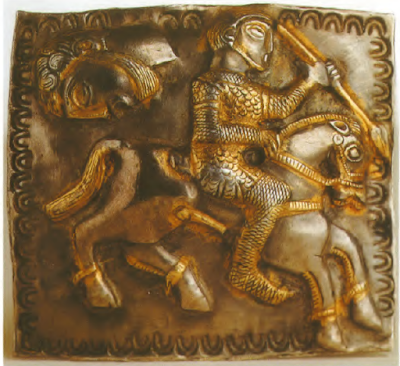 The same difference of interpretation appears in discussions of the horsemen. Bulgarian scholars usually call this figure The Hero, and from what I can tell they believe that Thracian myths were focused on the deeds of this hero. One source I found calls him "the god of hunt­ing, fer­til­i­ty, life and death, a pro­tec­tor and sav­ior often depict­ed as a rid­ing hunt­er," In these depictions the hero seems to have his mouth open, which to some scholars implies that he is shouting. Perhaps, they say, Thracian heroes were known for their loud voices or "great war cries" just like the those of the Iliad. 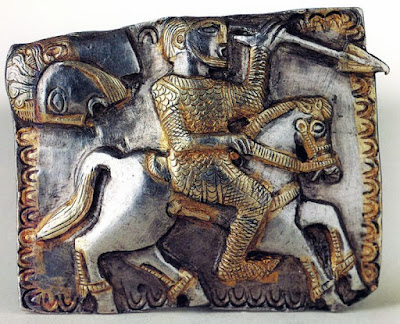 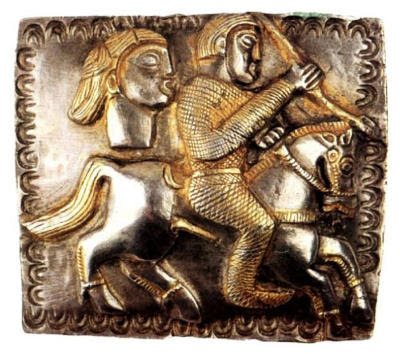 Notice the floating heads, some of humans and some of horses. 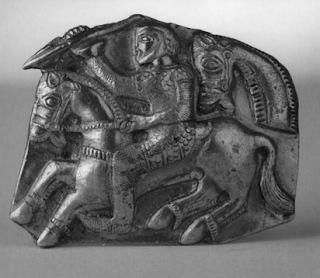 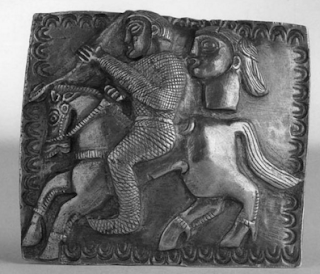 The general idea seems to be that these heads represent spiritual guidance being given to the hero. But by whom? Some think these are gods, which would explain why they are so large. Others think this is Orpheus, serving as divine messenger. At least one scholar thinks that these are the victims of sacrifice, speaking as they pass through the veil of death. After all one of the purposes of ancient sacrifice, and especially of horse sacrifice, was to obtain prophetic guidance. But you can certainly see that the Thracian hero had a lot of divine help as he went about his adventures. This is one theme of ancient myth that survived into the age of Arthurian knights, who were regularly corrected by wild hermits if they went astray during their journeys: "Galahad you great oaf, you were supposed to look for clues in that castle, not just romance the women!" 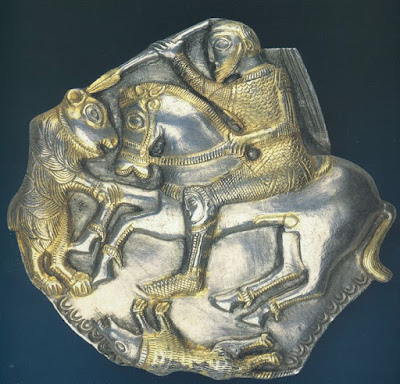 The rider or hero, hunting. I love these hints at half known, half imagined myths, especially when they gleam with gold from the earth. 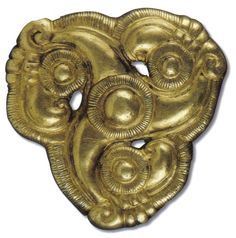