The Rain Miracle of Marcus Aurelius 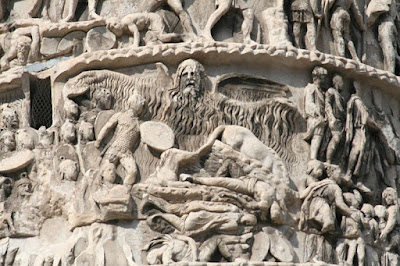 In 168 to 174 CE, emperor Marcus Aurelius waged war against two important tribes of northern barbarians, the Marcomanni and the Quadi. He eventually defeated them, and it is this war that is immortalized on the column his son set up for him in Rome. Perusing pictures of the column, I was startled by this image, and wondered what it could mean. Some shaggy German monster? A wookie? But I looked it up and discovered that this image is known as the "rain miracle." Cassius Dio:


For when the Romans were in peril in the course of the battle, the divine power saved them in a most unexpected manner. The Quadi had surrounded them at a spot favorable for their purpose and the Romans were fighting valiantly with their shields locked together; then the barbarians ceased fighting, expecting to capture them easily as the result of the heat and their thirst. So they posted guards all about and hemmed them in to prevent their getting water anywhere; for the barbarians were far superior in numbers. The Romans, accordingly, were in a terrible plight from fatigue, wounds, the heat of the sun, and thirst, and so could neither fight nor retreat, but were standing and the line and at their several posts, scorched by the heat, when suddenly many clouds gathered and a mighty rain, not without divine interposition, burst upon them. Indeed, there is a story to the effect that Harnuphis, an Egyptian magician, who was a companion of Marcus, had invoked by means of enchantments various deities and in particular Mercury, the god of the air,note and by this means attracted the rain.

I always like to try to imagine what it must have been like in person, to experience something that might compel you to attribute it to divine intervention.

You're a Legionnaire. You've been on campaign for far too long - years, perhaps, away from hearth and home. You're thousands of miles from civilization in the forests of northern Europe, surrounded by hostile barbarian tribes. Your food is poor, your marches are long, and your discipline is harsh.

The latest fight has not gone well. You're outnumbered and surrounded, with no hope of reprieve or help from anywhere. You're trapped in a ring of fierce warriors who are slowly wearing your forces down, taunting you, cursing you, hurling stones and axes whenever shield arms tire.

The situation is grim, and there seems to be no way out. You wait and you suffer. The sun beats down on you, your throat begins to crack with dryness, and your strength to stand - the only thing keeping you alive - is sapped away slowly but relentlessly.

So this is how it all ends - at the edge of the world, penned like an animal awaiting slaughter, denied a clean death and honorable rites. And for what? For the "glory" of Rome? Thousands of proud Romans sent to a pointless death in the wastes of the north, all for vanity? You would shake your head in dejection and disgust if only you had the strength.

But just as you're coming to the edge of your will, contemplating embracing your fate and the cold edge of the enemy's steel, suddenly a wind comes up. The men stir as if from a stupor. The air is dancing about you, the heat is giving way to a cool breeze. The blue sky begins to turn gray, clouding over at great speed. The wind comes in gusts, and then in gales. Thunder splits the sky overhead. The air takes on an eerie quality, sound distorted in the shifting atmospherics. The nearby trees are shaking and roaring in the squall.

At last the sky splits, and sheets of cool rain pelt down on the beleaguered army. The men are shouting, screaming their praises to the heavens, tearing off their helmets and turning their faces skyward. The walking dead are revivified by the embrace of cold water. You forget your aches and pains, and begin to think perhaps death can wait until another day. After all, there's still the glory of Rome to tend to...