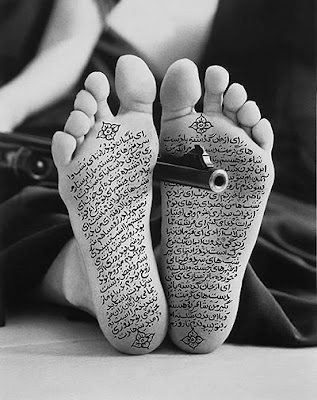 Shirin Neshat is a contemporary Iranian artist, born in 1957. She came to the United States to study in 1974 and after the revolution she decided to stay. She returned to Iran for the first time in 1990, making several trips before she was banned from coming back in 1996. These images were created in 1993-1997, an artistic response to the way her homeland had been transformed by fundamentalism. 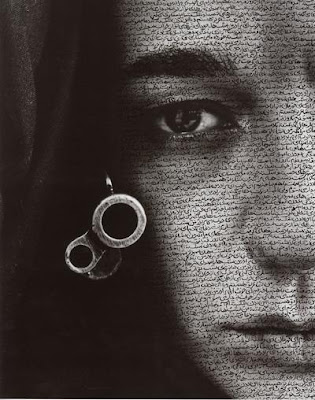 Neshat is a westernized woman but a Muslim.


Her works mainly explore gender issues in the Islamic world, particularly the various dimensions of women’s experience in contemporary Islamic society. The Iranian national identity in the twenty-first century is deeply rooted in the past and these women cannot ignore their cultural identities. Neshat believes that the 1979 Islamic Revolution in Iran led many Iranian women to become “brainwashed and submissive.” One of the themes of Neshat is to show how the compulsory veiling law in 1983 shows the power of Islamic laws placed significant limitations on Iranian women both in private and public domains. 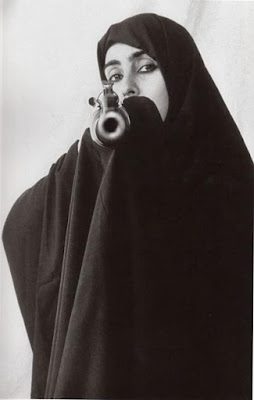 The calligraphy is Persian poetry by Tahereh Saffarzadeh (1936-2008), perhaps Iran's most prominent female poet of the twentieth century. These verses describe the role of Iranian women as supporters of the war effort against Iraq in 1980-1988. 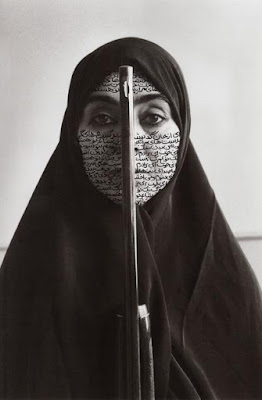 These fascinating, disturbing images are very controversial both in Iran and in the west, and there has been a huge amount of argument about how they should be interpreted. They certainly rattled my mind when I first saw them.
Posted by John at 8:25 AM