More from the Neolithic Death Pit of Bergheim 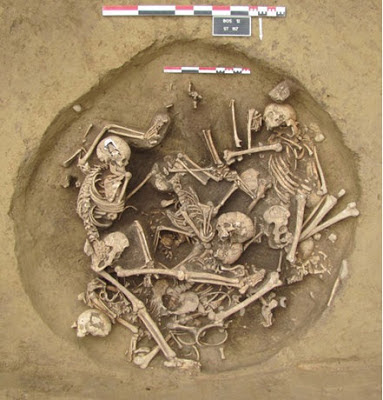 Last month I posted news of a gruesome discovery from the Neolithic site of Bergheim in eastern France: a burial containing seven victims of violence and also a deposit of violently severed limbs. 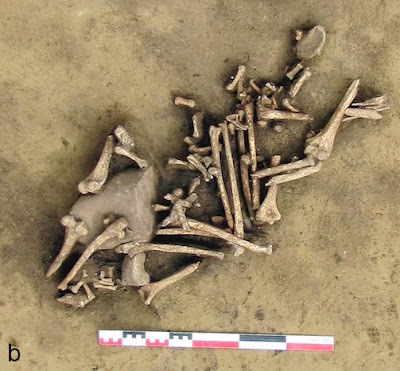 LiveScience has now posted an extensive set of photographs, showing in detail the violence meted out to these poor people. You can see that the severed limbs were not randomly tossed into the pit, but placed in a single pile in the center. And is it significant that there were seven complete skeletons and also seven severed arms? 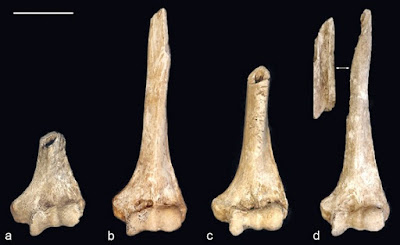 View of severed upper arms, likely cut through with an ax. 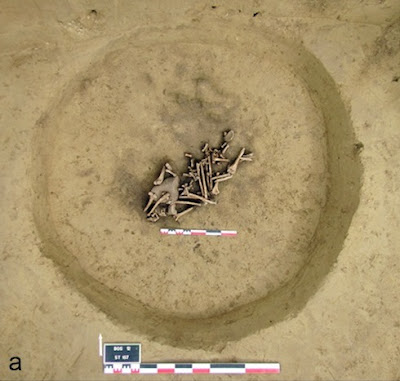 If you think in a big picture way about the European archaeology I have posted here over the past six years, you will detect a focus on violence, migration, and the possibility that the distant past was shaped by events like wars. This represents a big change from the archaeology of 1945 to 1990. After World War II, violence and migration were out; everybody talked about adaptation to the environment, slow evolution in place, peaceful change, and trade. Things that had always been called "hill forts" or "castles" became "ritual enclosures;" languages were imagined to spread via trade networks or to have evolved in parallel across vast distances. Elite behavior changed by emulation, not violent replacement. 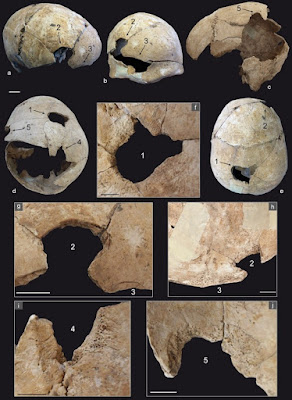 To me, much about the archaeology of the postwar period was simply wrong, and the current swing is a necessary correction. So far as I can see, the distant past really was full of violence, conquest, and migration, and probably slavery and human sacrifice, too. But I do wonder at the political side of this. The change in archaeological theory has exactly paralleled the retreat from socialism and the welfare state that has taken place across the Atlantic world. As our societies have moved back toward the freewheeling capitalism and grotesque inequality of the Gilded Age, our archaeology has also moved in the same direction, emphasizing things one could have read about in the journals of the 1890s.

From my perspective the pacifist archaeology of the postwar years was a desperate, doomed attempt to imagine a human past more suited to the needs of social democracy. I hope that the practice of working for a just society can be separated from the theoretical nonsense that accompanied it, and that we can be realistic about the world without giving up on economic democracy.

Sometimes I wonder, though. Sometimes it seems to me, watching things like the Trump campaign, that the motivating ideas are always crazy, and that wholly rational people would never accomplish much of anything. Maybe left-wing politics really is inseparable from left-wing philosophical nonsense, and only people with Che posters and Visualize World Peace bumper stickers will really work for a more equal world.
Posted by John at 8:47 AM

It strikes me that, at bottom, emulation, assimilation, and social evolution are in no way incompatible violence and conquest. "They are our enemies; we marry them."

A Castilian hidalgo murders two Arab-Andalusian parents and rapes their daughter, who then becomes the wet nurse and first language teacher to all his children. Centuries later, a Spanish word for making someone happy is alborozar. Meanwhile, her descendants by the master are scorned outliers, and the descendants of his official Castilian wife are honored gentry. Violence or assimilation? The violence alters but persists, and simultaneously a durable, even intimate structure has been created.

It seems to me the problem is allowing oneself to create models of the past that too much favor one side of human experience over others.

I might add, and how did the Arabs get to Andalusia in the first place? How did the Celts get to Britain? And yet, at a certain point in history they have become the peaceful, good-hearted hobbits violated by evil invaders. And that peaceful good-heartedness is not simply an illusion--it's a real part of human life, too. The challenge is to see both at once, as a whole.

Indeed it is important to hold all of human nature in our minds when we think about the past, because even violent invasions were marked by acts of kindness and negotiations for accommodation. Even if the maximum numbers from the geneticists are correct, the English are 60 percent descended from the Roman-era Britons, and long before 1066 Britons and Angles had intermarried and completely lost their ethnic distinctiveness. Records of early Anglo-Saxon days are full of people with British names, presumably indicating intermarriage among the elites, and probably lots of stories like David's of the Andalusian wetnurse.

Violence is never the whole story.

Nor, of course, is kindness and assimilation the whole story. The violence is real and bitter, and does not go away. The slave carefully tends the corpse of the master who beat him, and whom in large part he must hate.

People are, overwhelmingly, people. They don't change much, collectively speaking.

Seventy years ago, we were deathly enemies with Japan and Germany - today they're two of our greatest allies and trade partners, and both their cultures were influencing our own well before we ever became enemies, and continue to do so today.

The Venetians built for themselves an early colonial empire in the Eastern Mediterranean, combining conquest and trade continually in their own favor. Where possible they bought their victories with coin, but when necessary they turned to swift and efficient violence to enforce their demands.

And while they were often brutal in their methods, they and their subjects often influenced each other heavily. Venice infamously sacked Christian Constantinople during the Fourth Crusade, well before it fell to the Turks - and took away not only incredible amounts of plunder, but a new taste for Byzantine culture in general that would influence their own for many years to come.

In much the same way, their veneration of Saint Mark led to their (again quite infamous) theft of the saint's corpse from Muslim controlled Alexandria even earlier - and yet, the Egyptian Mamluks would be one of their primary trade partner for centuries, often despite the highly indignant protestations of Venice's Christian European neighbors and even the Papacy itself.

Pick a place, pick two peoples, pick a war, and you will always find violence mixed with cultural exchange and trade, often even directly paving the way for it. Why should this have been different in pre-history?