Modern Genetics and the Anglo-Saxon Invasion of Britain 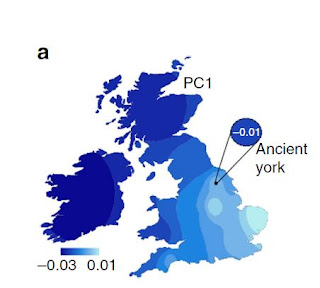 Rui Martiniano and colleagues have an interesting article in Nature Communications based on the analysis of DNA from nine skeletons from Iron Age and Roman York. They find that the people of Roman York were genetically much more like the modern people of Celtic Britain than they are like the people of England, which they attribute to Anglo-Saxon colonization. I love these three little maps, which show three different ways of mapping the difference between Roman and modern populations. Above, a statistical measurement of overall DNA similarity; below, Blood Type O and Y Chromosome type R1b-M269, the most common type in Ireland. These three maps all clearly show the arrival of new genes in the southeast, where they are most common, and then their spread across the islands. The findings of this study support the growing consensus that the population of England is 25% to 40% Anglo-Saxon. 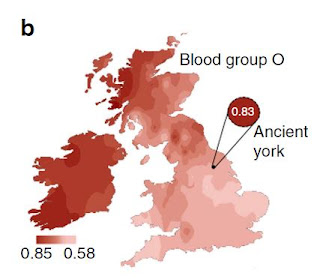 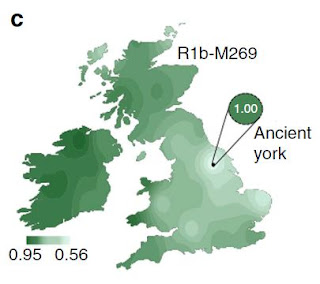 Martiniano et al., Genomic signals of migration and continuity in Britain before the Anglo-Saxons. Nature Communications 19 January 2016.
Posted by John at 1:49 PM