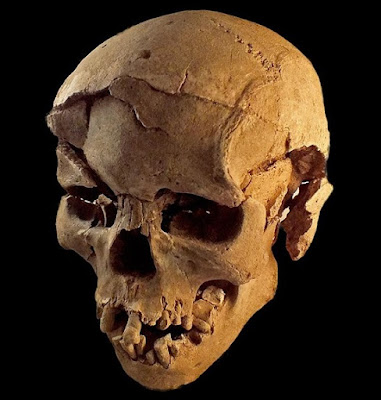 The latest on our violent past:


In a study published today in the journal Nature, a team of anthropologists describe a prehistoric mass grave whose inhabitants died a violent death, evidence that small-scale warfare was alive and well even among hunter-gatherer communities.

The site, discovered in Nataruk, Kenya, in 2012, housed the remains of 27 people, including 12 intact skeletons. Based on carbon dating of the bones and surrounding sediment, the researchers estimate that the deaths took place somewhere between 9,500 and 10,500 years ago.

Ten of the bodies had signs of injuries that were likely lethal: Five showed evidence of blunt-force head trauma, and five or six (one was ambiguous) had markings consistent with arrow wounds around the head and neck. Several of the skeletons also had fractured hands, knees, and ribs, and some were found in positions suggesting that their arms and legs had been bound.

The researchers also discovered a few arrows at the site made of obsidian, a volcanic rock that wasn’t native to the area, indicating that whoever had attacked had traveled far from home to do so.

Despite what you may have read, there is plenty of evidence for organized violence among hunter-gatherers. Their violence usually doesn't rise to a level we would call warfare because populations are small and dispersed. But in very rich environments that supported dense populations, such as the northwest coast of North America, there were hunter-gatherers (well, mostly fishers) who waged war with fleets of canoes, enslaved whole villages of their enemies, and other things we tend to associate with civilization.

Based on our nature, it seems obvious to me that humans evolved in an environment of frequent violence against outsiders. Here is just one more confirmation.
Posted by John at 2:16 PM

I'm quite prepared to believe that hunter gatherers engaged in organized violence, and there's much evidence to support this. But I have to wonder what you mean by "our nature." I hope you're not about to make one of those red in tooth and claw type arguments. Most humans just don't seem that heroic to me. In any case, human nature is, first and foremost, fiendishly complex, contradictory, variable, and adaptable. Our tremendous range of behavior, as individuals and as groups, is one of the things that has made us so successful, so far.

I mean things like suspicion of foreigners, blaming problems on outsiders when our neighbors are the real culprits, a strong habit of us vs. them thinking. Fanatical support of local sports teams. There is much about human mental habits that to me bespeaks a world of small communities surrounded by potentially hostile "others."

Yes, I would agree with that. I have often thought that perhaps the range of human social personality types is quite well suited to the needs of a small group among other small groups. The angry, paranoid types keep the group safe from actual enemies, the conciliatory types mend fences and clear up misunderstandings, novelty seekers cross over and mix up the gene pool, introverts moderate the group's risk-taking, etc. The personality types may spend a lot of time bickering and feeling themselves wronged, but the combination builds an overall strength. In any given situation, a given group might go with the wrong type-response, but over time and over tens of thousands of interactions, as a whole, the essential pattern of range and flexibility would grow more pronounced.