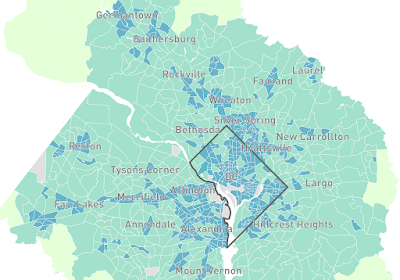 Silver Spring blogger Dan Reed got into an argument in a bar with a guy who insisted that because Reed lives outside the DC line, he lives in "the suburbs." Reed responded, "Silver Spring is an urban place! We have tall buildings! We're a major transit hub! I walk everywhere!" When he got home he did some research and made a map showing which census tracts around Washington qualify as urban, based on density of people and buildings. (For residential neighborhoods, the cut-off seems to be around 2200 people/square mile). You can see that the city boundary has little to do with the actual density of occupation. Urban-style neighborhoods -- dense, walkable, with little open space but good public transit and lots of restaurants, bars, etc. -- are scattered throughout the surrounding counties. 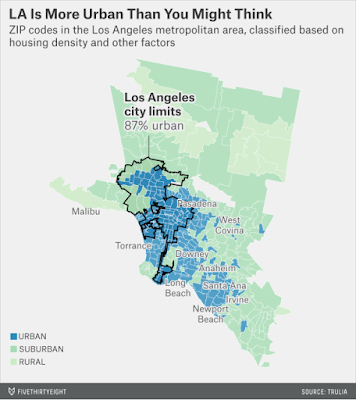 Reed based his DC map on some that Jed Kolko made for 538.com; Kolko's map of Los Angeles is above. Again, the actual urban area is quite different from the municipal boundary. Kolko found that the percentage of major cities that qualify as urban varies from 100% in New York and Chicago to 30% in Phoenix.

This matters because both the way of life and the demands on government are very different in suburban vs. urban neighborhoods, and increasingly in America both cities and suburban counties have to serve a mix of both types, leading to very complex politics.
Posted by John at 7:30 AM