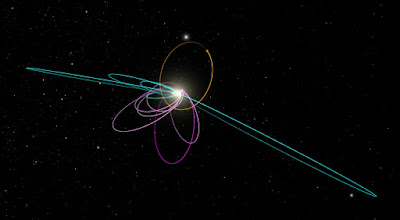 
Caltech researchers have found evidence of a giant planet tracing a bizarre, highly elongated orbit in the outer solar system. The object, which the researchers have nicknamed Planet Nine, has a mass about 10 times that of Earth and orbits about 20 times farther from the sun on average than does Neptune (which orbits the sun at an average distance of 2.8 billion miles). In fact, it would take this new planet between 10,000 and 20,000 years to make just one full orbit around the sun.

The researchers, Konstantin Batygin and Mike Brown, discovered the planet's existence through mathematical modeling and computer simulations but have not yet observed the object directly.

"This would be a real ninth planet," says Brown, the Richard and Barbara Rosenberg Professor of Planetary Astronomy. "There have only been two true planets discovered since ancient times, and this would be a third. It's a pretty substantial chunk of our solar system that's still out there to be found, which is pretty exciting."

The argument is essentially that the orbits of the known Kuiper Belt objects (Pluto, etc.) align in strange ways, highly unlikely to be the result of chance. (Click on the image above to see the orbits.) One way to explain these orbits would be to posit a massive planet in a sort of opposite orbit, the yellow one in the illustration. Of course, there may be other explanations,  and maybe by the time we have mapped a dozen more Kuiper Belt objects the anomaly will be disappear. Intriguing, though.
Posted by John at 12:51 PM