The Snake Witch of Gotland 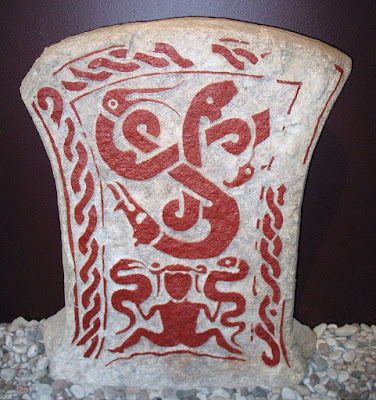 This Viking Age stone from Gotland, Sweden, is generally called the Snake Witch Stone (Ormhäxan Stenen). What it really depicts is much disputed. One obvious guess would be Loki in his guise as mother of monsters (Fenrir Wolf, Hel the goddess of death, and Jormungandr the great serpent) . Snorri's account of this episode actually makes Loki the father of the monsters with a giantess named Angrboda as the mother, so this might also be Angrboda, if she was known in Sweden. But various "scholars" have produced all sorts of other guesses, from Odin in female guise (he did that) to the Aegean mother goddess to the Celtic god Cernunnos.

The image combines two ancient bits of iconography: the mistress of animals and the woman giving birth. (Like Artemis and Diana, the virgin huntress was also often the goddess of childbirth.) This stone therefore reaches back to the earliest depths of Eurasian myth, and symbolizes as well as anything the vast store of vision, song and story that lies behind or medieval legends. Even if the carver of the stone had some particular character like Angrboda in mind, his work touches the deep springs of our culture: the dreams of Paleolithic shamans, the cry of the sacrificer, the mutterings of priests atop mud-brick towers in Babylon far away. 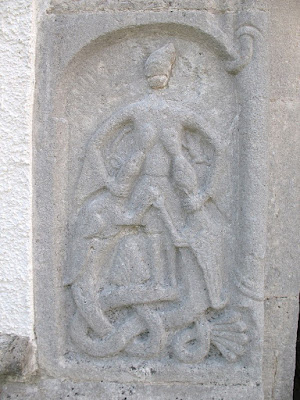 Another depiction of the mother of monsters, a small relief now in the Swedish church at Väte, which I posted because it came up in researching the Ormhäxan Stenen and I can't remember ever seeing it before.
Posted by John at 9:54 AM